The Other Side of the Struggle For Freedom (Part II) 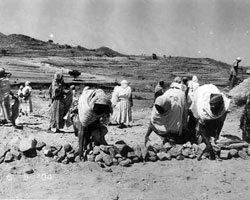 The collaboration and support among the people was the secret for the success of the Eritrean people’s armed struggle for liberation.  Realising this unique aspect of the people, different colonizers have tried break the bond among the people. In the mid 1980s, the Derg regime declared a new policy – of forced conscription of youth- so as to break the spirit of nationalism among the youth of the country but it ended in complete failure.

Another amazing fact in the history of the Eritrean people’s armed struggle was during the few years before of the independence of the country, at that time there was almost no electric power in the capital, Asmara. And this was the times of the 1990s World Football Cup; as a result many youngsters went from their places to those who had electricity to watch the matches. The regime took advantage of the situation and began shooting any one found in the streets after dark. Once the soldiers started shooting every one would open their house to any one who was fleeing from the shooting, no questions asked. The enemy forces who couldn’t accept their defeat took revenge on the civilians in every possible way but that was also overcome by the people.

Another incident of the 1990s was the bombing of the areas of Sembel, Godaif and the Airport in Asmara. Enemy forces were blaming the attack on freedom fighters but there

wouldn’t be any possible reason for the freedom fighters to attack their own people. Despite the efforts of the Derg to weaken the people’s support to the struggle, the people were helping the displaced citizens. Some gave their extra houses without any rent for the victims while others added families in their household.

After independence the support changed phase and was concentrated on helping the families of the martyrs. The youth were helping those families in ploughing farm lands and harvesting as well as building and renovating their houses. In 2004, nationals living aboard also began extending material assistance to such families. Though the program was initially meant to go on for two years, it is still going on to date.

In the recent border dispute with Ethiopia, this deep-rooted culture of unity and cooperation was further strengthened. When thousands of Eritreans residing in Ethiopia for generations were deported and others were displaced from the disputed areas, they were received and treated well by their fellow citizens. And anyone can see that the culture of helping each other among the people of Eritrea has not faded away even after independence.

Now, it has been 19 years since the liberation of Eritrea and many reforms and development plans have been achieved, and all through the country’s internal capacity.

People of Eritrea wherever they are, have the same desire, first it was independence and now it is rebuilding the country.  The most precious resource the country has is the devotion and hard work of its people. The unity among the people has been the secret to the people’s success and continues to be so in spite of numerous challenges. And everything will be possible as long the people continue to march on, putting one foot after the other.