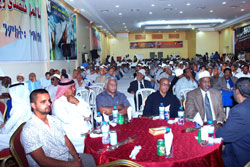 Asmara, 30 May 2010 – Eritrean nationals residing in Riyadh and Jeddah, Saudi Arabia, celebrated the 19th Anniversary of Independence with patriotic zeal.

Speaking at the event on May 27 and 28 in Riyadh, the Eritrean Ambassador to the Kingdom of Saudi Arabia, Mr. Mohammed Omar Mahmoud, pointed out that the impressive achievements the Eritrean people both inside the country and abroad have registered in all domains while overcoming all odds attests to the bright future of the country.

The Chairman of Eritrean Community in Riyadh, Mr. Girmay Yemane, on his part commended the active participation of the nationals in all-round development program of the country, and called on citizens to promote their due contribution for successful implementation of the nation’s program.

During the two-day festivities, various programs reflecting Eritrean people’s resolute rebuff, cultural shows, general knowledge contests and sports activities, among others were carried out. Prior to this, an exhibition highlighting Eritrean development achievements, cultural and geographical resources was displayed in which Saudi officials and other diplomats took part.

Similarly, Eritreans residing in Jeddah and its environs marked the Independence Anniversary colorfully in which Eritreans and friends participated. Different programs including cultural and sports activities were conducted that added color to the event.