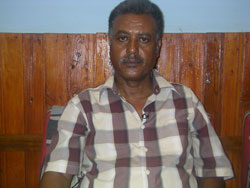 Assab, the capital city of the Southern Red Sea Region, is among the first cities in Eritrea. It encompasses three administrative areas of Assebuy, Shekayto, and Blien-koma that extend over 37.37 square kilometers. The majority of Assab’s inhabitants make their living from trade while the rest of them are fishermen and pastoralists. Let’s have a look on the various service rendering institutions within the port city.

In the coastal city there are 10 schools that include three kindergartens; five elementary schools, and one junior and one secondary school as well. These schools, besides giving regular educational service to the inhabitants of the city have also been rendering satisfactory services to students who joined from rural areas. In order to provide them access to education and also enable them pursue their junior and secondary school studies, the government has been educating them in boarding schools covering their educational as well as living expenses. On top of this, extensive educational services have been given to dropout students so as to enable them carry on with their higher level education.

Although the availability of water in every place is of higher importance it is beyond compare in the Southern Red Sea Region – one of the hottest places on the earth. If it had not been rich in underground water resources, it would have been impossible to sustain life in the Southern Red Sea region. The port city get water supply from a distance of 15 kilometers, which is distributed to all corners of the city through 50 kilometers long water pipe lines. Old water lines have also been replaced in order to ensure that water provisions are not halted.

Electricity related problems have also been solved. The former electric generators have been replaced by new ones that have enabled a 24-hour service. Different studies have proven that the Southern Red Sea Region is potentially rich in wind generated electricity power.  For this reason, three turbines that have been generating 1/3 of the city’s electricity demand have been planted.

With regards to fishing activities in the area, Mr. Brhane Eyassu, Administrator of Assab, said that it is customary that people living in the coastal to make their living through the incomes they gained   from fishing. Fishing is mainly done through traditional practices; advanced level of fishing activities has also been undertaken.  The government has been making due effort to enhance technology-backed fishing activities. In this connection, extensive assistance has been extended to strengthen the association of fishermen to meet the ultimate goal of improving their living standards and securing fish provision to different corners of the country.

As regards to infrastructure, the completion of the Assab’s new master plan has been one of the main tasks of 2009 that would play a determining factor for the overall development of the city’s infrastructure. So far two master plans that are expected to change the city’s general appearance have been drafted. The master plan of about 113 hectares finalized last year has reached implementation stage. Besides this, in this year, a new master plan of about 500 hectares of land has also been finalized.

Regarding future plans for the city, Mr. Berhane, said that three schools that include  middle and secondary levels, and as well as  a technical school, first of its kind in the region would be constructed.  “New water supply projects are also to be undertaken in this year,” Mr. Berhane elaborated.All the aforementioned plans help one visualize the advancement the city is heading for.