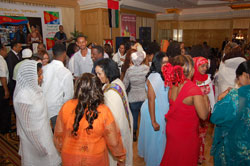 Eritrean citizens living in Abu Dhabi and Belgium respectively celebrated the 19th anniversary of Independence Day in a colorful manner, according to reports.

Asmara, 31 May 2010 – Eritrean citizens living in Abu Dhabi and Belgium respectively celebrated the 19th anniversary of Independence Day in a colorful manner, according to reports.

In the celebrations held in Abu Dhabi in which a number of Eritrean nationals, diplomats and foreign friends of Eritrea took part, Mr. Al-Amin Nafi’e, Charge d’Affaires in the Eritrean Embassy to UAE, highlighted the paramount importance of May 24 in the Eritrean history of resolute rebuff. Noting the impressive achievements registered in the implementation of major development programs in the Homeland, he called on Eritrean nationals in Abu Dhabi and its environs to enhance contribution to the national cause.

The chairman of the Eritrean Community in Abu Dhabi and its environs, Mr. Al-Amin Ali, on his part asserted that members of the Community would step up contribution to the integrated national resolute rebuff through standing alongside the people and Government. Aser Cultural Troupe from Asmara staged musical performance on the occasion, thus adding color to the celebrations.

Also in similar celebrations conducted on May 29 in Belgium, the Eritrean Ambassador to the EU and Belgium, Mr. Girma Asmerom, gave briefings on the development achievements scored over the past 19 years. He underscored that Eritrea is now standing on solid ground through foiling all acts of conspiracy and hostility.

A number of Eritrean nationals participated in the colorful celebrations that were organized by the Resolute Rebuff Committee in Belgium, the Eritrean Community in that country and the NUEW. They reiterated determination to live up to the nation’s expectations through keeping intact unity.