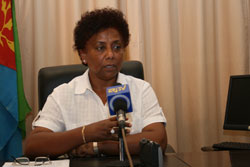 The Minister of Justice, Ms. Fawzia Hashim, said that vigorous endeavors are being made to introduce a pyramidal-work structure so as to minimize work load resulting from the flow of cases to courts.

Asmara, 31 May 2010 – The Minister of Justice, Ms. Fawzia Hashim, said that vigorous endeavors are being made to introduce a pyramidal-work structure so as to minimize work load resulting from the flow of cases to courts.

She indicated that previously various cases were presented to the High Courts, which in turn used to cause unnecessary time wastage. Simple and social-oriented cases would be referred to lower levels of administration of justice.

Ms. Fawzia further explained that only very complicated cases dealing with international and regional conventions and agreements, as well as foreign investment and natural resources would be presented to higher and special courts.

The Minister went on to say that a curriculum on law has already been prepared so as to continue the law programs through the collaboration of the institutions of higher education, and thereby upgrade the competence of staff members and ensure fair verdict. The necessary ground has been laid that would enable staff members who graduate in certificate and actively engaged in various tasks to continue education up to the First Degree level in the coming 5 years, she elucidated.

Noting that Evidence Law is being introduced so as to do away with the problems encountered as regards the question of heritage and fatherhood, Ms. Fawzia pointed out that on top of the oath made in the Holy Bible and Koran, the evidences put forth would be scrutinized scientifically. She further called on youths to refrain from resorting to criminal acts, and thus work hard to ensure a bright future for themselves.

Role of parents imperative in efforts to nurture reading habit