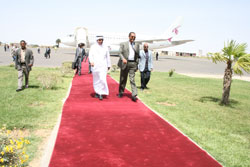 During his stay in France, the President attended the 25th Franco-African Summit which was held from May 31 to June 1 in the city of Nice.

In the course of the Summit in which over 50 Heads of State and Government, as well as representatives of a number of international and regional organizations and associations participated,  discussion was conducted on various agenda items, including international peace and stability, climate and development, as well as Africa’s role in global management and the like.

Earlier on May 29, President Isaias held talks in Doha with the Emir of Qatar, Sheik Hamed Bin Khalifa Al-Thani, and other senior Qatari officials on enhancing bilateral relations and regional issues of mutual interest to the two countries.