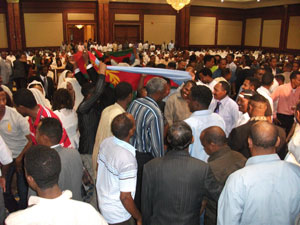 Speaking at the celebration conducted in Khartoum on June 1, the Eritrean Ambassador to Sudan, Mr. Issa Ahmed Issa, outlined the impressive achievements which the nation had registered since independence. He further explained that the historical and strategic Eritrean-Sudanese relations continue to gain momentum.

In a speech he delivered on the occasion, the Eritrean Ambassador to Qatar, Mr. Ali Ibrahim, said that Eritrea is registering gratifying outcome in the development drive through the concerted endeavors. He further called on all nationals to continue their exemplary stance.

Moreover, Eritreans in Yemen marked the Independence Day anniversary, during which the Eritrean Ambassador to Yemen, Mr. Musa Yasin, highlighted the sacrifices which the Eritrean people paid to achieve independence, and the momentous achievements scored after liberation.