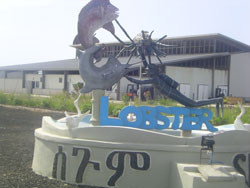 Araéta sub-zone is one of the four subzones of the Southern Red Sea Region. Although it has a long history that traces back to the times of the Portuguese and the Turkish colonial period, it has been deprived of any developmental activities. Tió – one of the ten administrative areas and the major town of Araéta sub- zone – is believed to be among the earliest towns to have experienced urbanization. Nevertheless, neither the town nor the other villages within the Araéta subzone gained advancement that equal their long history.  Araéta sub-zone used to be one of the forgotten areas during the colonial era, at present, it is progressing in terms of health care, education, water supply and other provisions.
According to Mr. Omar Yahya Hajji, administrator of Araéta sub-zone, though access to education was confined in the only school at Tió, at present, the Sub-zone has more than 12 schools that include elementary, junior and secondary schools that give regular educational services. Above all, Tió’s boarding school is playing a crucial role in providing students from rural areas an access to education and changing their living standards. A number of youth equipped with various specializations are now deployed in different public and private institutions owing to the educational opportunity being provided in Tió and other different schools within the Araéta sub-zone. Moreover, the inhabitants of the sub-zone have been able to get commendable health care services in three health care stations of Ayumen, Groli, and Aytus.

Tió administrative area comprises of villages such as Tió, Sahil, Dareta and Sareta. Though hard to imagine, besides the people’s involvement in trade, agricultural activities have been initiated in the above mentioned semiarid areas with substantial support by the government. The inhabitants of different administrative areas have managed to cultivate farm lands and small-scale gardening activities have also been introduced.
The population of the administrative areas has been gradually increasing as the result of the growing number of service rendering institutions.  Forty five villages of the Araéta sub zone used to fetch water from distant semiarid areas. Scarcity of potable water supply that used to be a major problem prior the completion of water supply projects at different places of the sub-zone has now become a past story for various water distribution centers have been established in the post independence period.

The sub-zone and particularly Tió is situated in a place surrounded by the long coastal line of the Red Sea and, therefore, fishing activity is a common practice among the inhabitants of the subzone. Association of fishermen in Tió that embraces 170 members has been engaged in providing dried and fresh fish to the market. The government has also been extending relevant support to the association in terms of fishing boats and equipment.
While traveling across Tió streets, one could easily see boats harbored in a recently established dock. Near the harbor lies a fish preservation center that began services in 2008.Engineer Weldemariam Tsegay, a technical advisor to Tió, Idi, Gelalo fish preservation centers said that the center has started to export fish to Yemen in limited quantity although the long term plan is to enhance the exporting capacity of processed fish.“The center that has the capacity to hold around 200 tones of fish, plans to expand distribution of whole and as well filleted fish for local consumption and export,” Engineer Weldemariam said.

Once deprived of any sort of development, the town of Tió and the entire sub-zone have been on steady development for it became beneficiary of the different infrastructure that has been put in place. Electrification has been one of the new developments in the area. As the Massawa-Assab road passes along Tió and other places within the sub-zone, different villages along the line have been connected through road networks.
Any passerby could observe different development endeavors across the lengthy road of the Southern Red Sea Region that passes along the coastal line.  In Hoda, eight kilometers away form Tió, for instance, a hotel that is under construction is expected to make due contribution in tourism promotion of the historically rich areas  as well as  a haven for abundant wild life.
As regards the future developments in the area, Mr. Omar Yahya Hajji pointed out that the master plan of Tió has been finalized and the town would be expanded to a place near Hoda.