The Second Election to Choose Members of the Assembly 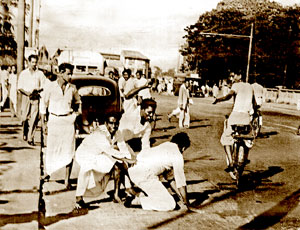 The Student Movement Of 1957

In the year 1957, many Eritreans were imprisoned without any cause or reason especially anyone asking about the rights of the people and the country seemed like a huge prison. The youth of the country especially the students couldn’t tolerated this unjust action of the colonial power and start opposing in public.

In one of the government schools in the country, Kedamawi Haileselassie Secondary School, the students were not allowed to talk in their mother tongue and the flag raised in the school was the national flag of Ethiopia so was the national anthem. One day the students organized themselves and began protesting under the pretext to change the principle of the school.

On May 1957, these students went to the center of the capital and requested to meet the officials of the country. Later their peaceful demonstration was met by police force which leads to the students’ claim that they don’t want to learn in Amharic.

This protest stayed for days where the students organized themselves from various places of the city, even Asfaha, governor of the country, tried to meet and convince the leaders of the students to return to their classes but it all ended in a complete failure. The Police tried to force them to return to school but the students faced the police by throwing stones and continued their opposition. The student opposition spread to other parts of the country.  Even though there were few who returned to their classes, the opposing students learned the betrayal of the fellow students and attacked the students slipping to the school. After this incident the police imprisoned leaders of the students, Seyoum Tareke, Eyob Gebreamlak, Belay Giorgio and Berhe Tesfamaraim. The students asked for the pardon of their leaders and the government rejected their request which lead to other forceful demonstration by the students where they destroyed the school’s equipments and property. Here, the leaders were Gelya Tesfamaraim, Tekue Yehdego and Daniel Haile and after this last incident hundreds of students were sent to prisons in Adi Quala and Kedamawi Hailseselassie Secondary School was closed for a year.

The students’ protest abated but it had greater effect on whole the country, parents started to request for the freedom of their children and opposed the oppression and cruelty committed by the police. This protest creates huge hatred among the youth of the country towards the colonizers.

On March 10, 1958 all the workers in the country began a protest. They gathered in the capital were 20,000 member of the Union resided and all service rendering institutes were closed and all workers gathered in St. Mary Coptic Orthodox Church, and the city was abandoned for the whole day.

In the following morning the workers followed by other residents of the city and children gathered in the church and continued to protest, which eventually spread to the rest of the country. Police opened fire on the civilians killing and wounding many while others were imprisoned including the leaders of the Workers Union.

The chaos, protest and instability in the country continued for six days. In those six days police with weapons were faced by angry citizens with stick and stone. World media began writing and broadcasting about the riot in the country, then the Ethiopian Government threatened the people to use further force, including the army. The People halted the protest for the sake of women and children but the incident proved that the independence of Eritrea could not be gained through peaceful protest. Leaders of the Worker’s Union stayed in the prisons of the country for months and the Union was officially banned by the governor.

After this protest, the people of Eritrea began gathering in secret to create a stronger opposition movement for the liberation of the country.