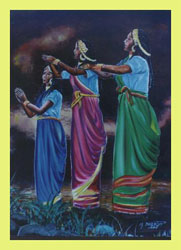 Mussie Asghedom is one of Eritrea’s principal artists. He got into painting when he was 12 and has been working since. Mussie was born in one of the rural areas of the country from a family of farmers; but he started painting at early age and developed his talent through. Mussie passed away in Feburary, 2010 and this article is dedicated in his memory though some of the information was gathered before his death.

“I can not say I had the influence of friends, siblings or anybody from my village. My inclination towards art was just a gift, with out any inspiration from any one,” was Mussie’s confession about his first steps in the world of arts.

When he was making his first novice sketches in 1977, Mussie said that he was not aware of what was lying ahead and didn’t know that he has so much to learn. Comparing his background and what he have been through, the things he achieved in his 30 years of experience in the world of art was quiet remarkable.

Mussie’s work emphasis in anatomy and sculpture and some of his works has been displayed to the public especially the cartoons. He has produced a book, 6th Offensive in cartoons, in collaboration with another artist, Micheal Adonay. Being a good listener, Mussie has the talent to express a speech of five hours in a five pages cartoon characters.

The masterpieces like “Mifenaw”, “Kanza” and “Zeym’mbrkak” have gained admiration from the fans of art. His other talent was on animation which got attention both nationally and continentally. And this enabled him to associate with artists abroad.

Recently Mussie has presented his work in association with an art establishment called the “Mediterranean Art” and had received good letters of recommendation from the association. He also got a certificate for the outstanding accomplishments among African artists in an international cartoon contest held in New York in 2008. He with his colleague Fessahaye Zemicheal has also participated in an artist meeting held in Norway representing Eritrea.

Artist Mussie has been doing his very best in upgrading the standard of art at national level and has made many contributions like background paintings of various events, mural paintings, illustrations, cartoons, etc.

Mussie was a member of Mirara Artist’s Association. Mirara Association has four members and works in training young talented artists. Mussie played his role in this regard.

The Second Election to Choose Members of the Assembly