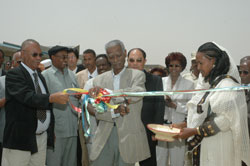 The College of Arts and Social Science in Adi-Keih constructed at an expenditure of 255 million Nakfa through the coordination of the Government and partners was inaugurated today.

Adi-Keih, 11 June 2010 – The College of Arts and Social Science in Adi-Keih constructed at an expenditure of 255 million Nakfa through the coordination of the Government and partners was inaugurated today. Minister Woldenkiel  Gebremariam inaugurated the boarding college that could accommodate over 2,000 students.

Speaking at the inauguration ceremony in which ministers, senior PFDJ officials, Army commanders and village elders took part, the Dean of the College, Dr. Ogbagebriel Beraki, indicated that the Government is giving top priority to the task of expanding institutions of higher education. He further pointed out that the newly constructed college which is equipped with the necessary facilities meets international standard, and that it would begin service next August.

The Administrator of the Southern region, Mr. Mustafa Nurhusein, stated that the implementation of such a major development program fully attests to the internal capacity of the people and Government of Eritrea.

A speech delivered on behalf of the Chinese Embassy to Eritrea stated that the task is the outcome of the Eritrean government’s endeavors towards developing human resource. In this respect, it asserted the readiness of the people and Government of China to extend all-round support in the development of the sector.

The college constructed through the Chinese construction company, Shanza Construction Engineering, includes Ground +2 building complex with 5 blocs that could provide boarding to about 1,800 students, 30 classrooms of different sizes, a cafeteria that could accommodate 1,000 students at a given time, an assembly hall, 60 rooms for instructors’ residence and various laboratory and library facilities, as well as other infrastructure prerequisites.

Caring For Families Of Fallen Heroes: A National Priority