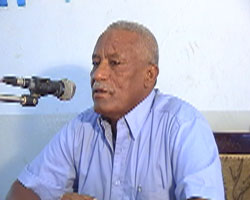 In a meeting they held, the inhabitants of Tessenei sub-zone said that they would enhance the initiative of supporting families of fallen heroes that was launched in 2007.

Tessenei, 16 June 2010 – In a meeting they held, the inhabitants of Tessenei sub-zone said that they would enhance the initiative of supporting families of fallen heroes that was launched in 2007.

In line with a genuine gesture taken by owners of various business ventures in Tessenei sub-zone to assist martyrs’ families, about 3 million Nakfa was raised that was channeled towards the rehabilitation of 209 martyrs’ families through the fields of their choice.  It was also disclosed at the meeting that a number of benevolent nationals are undertaking exemplary task in supporting families of fallen heroes for a period of one year.

Speaking at the meeting, the Administrator of Gash-Barka region, Mr. Mussa Rab’a, lauded the initiatives taken and called on other citizens to emulate the gesture.

The Administrator of the sub-zone, Mr. Tekleberhan Gebrewold, stated on his part that the living standard of a number of families have been improved as a result of such benevolent initiatives. Also in the second phase of the assistance, over 580,000 Nakfa has been collected and that 5,700 Nakfa each is being paid to 104 additional martyrs’ families through the Ministry of Labor and Human Welfare branch in the region.

A representative of martyrs’ families supporting committee in Tessenei sub-zone, Mr. Michael Tekle, indicated that those families that have been supported by the benevolent nationals would continue to be assisted through extending them 500 Nakfa each monthly and other activities.