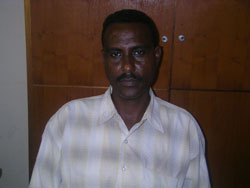 Customary laws have qualities that outweigh modern laws in terms of depth, intensity and details of legal procedures and particularly in moral responsibilities. Before the introduction of modern law, the Eritrean societies used to settle matters depending on already set customary laws that were functional among different populations. Most of them have been orally transferred form one generation to another. Of course some of them are documented in publications to date. The depth of the philosophy and their magnitude makes one admire the subtle and pragmatic ways of peacefully settling matters of different kinds.  Of the many rich Eritrean customary laws, Mada-customary law of the Afar ethnic group, has been preserved in the written form through the initiatives taken to collect materials form the memories of Afar elders.

The Afar customary law (Mada) has survived from generation to generation through oral transfer. Like many other Eritrean customary laws, Mada’s benefit for the future generation has been one of the major concerns to the Afar ethnic group. The tribes of the Afar ethnic group had developed different laws that govern their daily activities. Each clan or tribe in a broader sense, used to solve legal cases in an isolated way. But they eventually agreed on the idea of having a unified Mada. Bur Eali Mada is one of the modified collections of the Mada that were functional in different localities of Bidu, Ara’ata, and Fedi. After different deliberations the elders of the three localities agreed to combine the three Madas into a unified code under an atmosphere of mutual understanding and beneficial cooperation.

Bur Eali mada was named after the Bur Eali tribe that took the initiative in organizing the conference held in Eddi. The conference was open for two terms to make amendments. Even though Budduto Badir and Bur Eali are the most recognized Madas, with the passage of time Bur Eali Mada gained wide acceptance among the Afar ethnic group.

In the afar ethnic group crimes are divided into five types of crimes like Eido (killing) crime on life, Aymissiya (injury) crime on body, Rado– crime on property such as looting and breaking, Samo– (adultery) and Dafu– crime of insult (defame).

According to the Mada there is no individual liability for the crimes committed by any member of the community. But rather the responsibility of crime lies on the culprit’s entire clan and tribe in general. This makes the criminal shoulder huge moral responsibility for he would put his clan and tribe in danger of sharing some portion of the crime he/she has committed.

Although difficult to locate a definite period of time as to the historical background of the Afar customary laws-the laws have been functional for a long period of time. According to Mr. Ge’ase Ahmed, courts coordinator in the Southern Red Sea, filing a suit at government court or any law enforcing government body has almost never been seen. The Afar ethnic group always desires to solve their problems on their own. Making a case in the court of law is considered as a taboo that violates the longstanding customs of Afar communities.

Every principle stated in the customary law has its own sub divisions. The categories of crime depend on the extent of the crime and acknowledgement for the crime whether of admission- Abaeitto or negation (Refusal)-Gelelway. The admission in itself is divided into two sub divisions of Gorhi- intentionally committed crime and Garhi– unintentional act of crime.

The punishment is also categorized in accordance to the severity of the crime. The basic solution for settling the criminal acts is through Diat-compensation for murder and Deikha- compensation for cases other than murder.

In the kinds of injury severity, the wound or damage that befalls the individual is checked for whether any trace of stick or other tools is easily seen on the body, leaving a scar after the healing of the wound, the severity of the crime hinders some organs from properly functioning, or whether the offence renders the organs permanently out of use. The later division Walalla, deals with injuries that leave parts of the body bleed externally.

When it comes to compensation the standard means is through Bukalos– meaning goats given as a means of settling any kind of criminal act whether it is simple or heinous. The number of goats that are demanded vary from one case to another in order to fit with the extent of the offense. However, the number of goats decided as a standard measurement for a criminal act is convertible to camels, cows or money.

The customary law views murder case committed upon pregnant woman the same as the heinous act is committed upon  two lives – the woman herself and as well the baby in her womb. So the clan of he criminal is liable to compensate the clan of the woman and the husband’s clan in terms of Baklo.

The Mada also covers varied details on the preservation of natural resources such as wild life, natural vegetations, and the Afar ethnic group is always committed to keep the environment intact. And any one who violates the set rules, shoulders responsibility of the act along his clansmen. For instance, if two opponents fight near a well of potable water and contaminated the water source, both of them are called on to bring Bukalos that would be slaughtered there in the fighting place as a punishment pursuant to Sira (law of wells).

Unlike contemporary laws there is no authority called executive whose job is to enforce law. Nevertheless, the ruling of the Mada should become effective through the participation of young individuals at the age group from 20-25 known as Fi’ima. The Fi’ima act as errand runners but they do not have absolute power to execute the verdicts. However, they are respected as law enforcers by the members of the communities.

As mentioned earlier there is no individual liability for any unlawful act. If the clan or tribe that is held responsible for the crime its members committed fails to compensate the families of the victim, the clan or tribe of the victim considers it as a challenge and may seek revenge for the offense. It is the fear of discord and bloodshed that makes the opposite parties accept the ruling of Mada and abide by its legal proceedings.

The varied points discussed so far may help give a general picture about the Afar customary law.

Legal proceedings begin with the plaintiff’s making a case and calling the attention of the elders. Then Maro(court of hearing) is established to investigate the claim(Agard). Before the start of the hearings, both parties, the plaintiff and defendant, name Habi (guarantors) who are asked to bring Leeke-aysho (food and drinks). In the Maro, the Makabon (judge) allows the plaintiff the first chance to address details of his case. It is important to notice however, equal chance is given to the defendant as well. Following which, the Macabon once he made sure that both the parties present their cases to the Maro, he asks someone from the Maro to give summaries of what has been said by the plaintiff and defendants. When investigation on the argument of both parties is completed, the Macabon refers to the Mada to find out an appropriate punishment.

The clans of the Afar ethnic groups are at times forced to disown one their member for repeated crimes. If a clan disowns its member the clan can neither be held responsible for the crimes committed by its member nor can claim any charge against any other clan that committed any act of crime to the disowned person. The disowning can be partial; such as disowning the person’s properties of top importance and disowning him/her as a person.

Reconciliation (Ama) among the clans is made by payment of Diat(compensation). If this is accepted by the victimized clan, the clan of the culprit is called on to provide Sepa– a kind of Leeke-aysho for the Macabon. The clan of the wrongdoer is disarmed of any harmful objects and is made to wear loose clothes and is taken over to the place of the victim’s clan. Then the Macabon’s job is to ensure the reconciliation takes place.  He makes the members of the bereaved clan repeat after him Yalial Habil Nel Rasa (forgive and forget). The process comes to an end when the Macabon voices the Fataha (the completion of court proceedings).

All in all the Mada  of the Afar ethnic group is very inclusive of many socio-cultural, economic, environmental  and other  detailed laws that are not discussed here.

Benefits of Vernacular Languages in Education