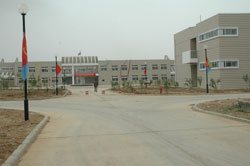 A remarkable new building complex situated within 17, 540 square meters of land at the very gate of the town of Adi-Keih invites one for a closer look. It looks as if a new small town is growing in the surroundings of Adi-Keih. Observing the space the building is situated at, one could not imagine it to be the newly constructed College of Arts and Social Sciences (CASS) but rather a newly established town that seems to grow rapidly.

The Adi-Keih College of Arts and Social Sciences that was inaugurated last Friday 11th of June 2010 is expected to accommodate around 2,500 students in different fields of study that include Fine Arts and  Journalism and Mass Communication in diploma program, English, Eritrean Languages and Literature, International Relations, Geography, History, Archeology, Anthropology, Sociology and Social Work, and Political Science in degree program. Besides, a 5-year Law degree program will also start in the next academic year.
The infrastructure of the college that meets international standards is first of its kind in the country. Actually the college was finalized in two phases of construction. The first phase includes the

Administrative building, library, classrooms, medium sized halls, bookstore, a clinic and dormitories for 500 students, and modern auditorium and sports fields.
The   second phase which is the expansion phase of the building includes five blocks of ground plus two dormitory rooms that could accommodate 1,800 students, 30 classrooms of varied sizes that can accommodate 30, 40, 80 and 110 students as well a dining room the could hold 1,000 students at a given time. Two of the aforementioned classrooms are for computer classes. Additionally it includes staff office of 60 rooms with a conference hall at each floor as well as a building for storage purposes.
The most appealing quality of the college is that it has been built to serve for a long term period. It has well built sewage system, rain water reservoir pools that could hold 800 m3, three generators of 440 kilo volt each, solar powered bath system and other facilities.
The College of Arts and Social Sciences has been temporarily situated within the campus of the Eritrean Institute of Technology (EIT) at Mai Nefhi since 2004. This time, however, it would start as an autonomous college in the new building complex at Adi-Keyih.
The place where the college is located definitely becomes a good place that provides practical study materials for the different fields of studies the college is about to offer in the next academic year beginning in September.
Present at the inauguration ceremony, Dr. Ogbaghebriel Beraki, Dean of the College of Arts and Social Sciences said “The new site of the college is unique for it is situated in the

immediate environs of Adi-Keih which itself is located in one of the highest sandstone plateaus blocks, flunked by deep valleys, guarded by distant mountain ranges.”
Pointing put that the gorgeous landscape that encompass rich historical and archeological relics enables effective researching ventures in geography, history, archeology and anthropology; for languages and literature the awe inspiring landscape stimulates creative writing, the doctor summarized that  “the area is indeed a natural museum and socio-cultural laboratory” for the varied field of studies.
Being one of the seven institutions of higher education, College of Arts and Social Sciences Adi-Keih is now ready to offer services as an independent entity. The establishment of new laboratories equipped with the required facilities and improving the existing ones would become the next step the college will concentrate on.
According to Dr. Ogbaghebriel efforts are underway to improve laboratories for geographical information system (GIS), journalism, languages, history, archeology, and anthropology resource centers, and special laboratory and library for visually impaired students.
The availability of higher education opportunities and its importance for all-round development cannot be overstated enough. The government of Eritrea has been dispensing huge investment resources to gird up the institutions with provision of qualified professors; laboratories, workshops, books, and information and communications technology (ICT).
The newly established college is by all measurements a prototype and a good start that would open a new chapter to the ultimate goal of upgrading the other institutions of higher education.
In the official inauguration of the college that was built with the cooperation of the government of Eritrea and development partners at a total cost of 255 million Nakfa government officials, ministers, religious leaders, members of higher educational institution, the inhabitants of Adi-Keih and invited guests took part.
Also present at the occasion representative of Chinese Ambassador to Eritrea pointed out that Eritrea has since independence targeted education as a priority and made quite impressive achievement in education system and many other areas.
As an indication of the good partnership between the two governments and peoples of Eritrea and China, representative of Chinese Ambassador to Eritrea presented the College of Arts and Social Sciences with a Sony projector. The Administration of Southern Region on its part offered artifacts that have images of the flags of Eritrea and China to the ambassador of China and to other members of Shanxi Construction Company who have contributed in the establishment of the college.