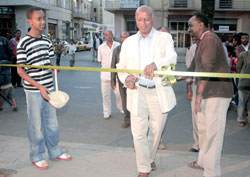 Asmara, 18 June 2010 – An exhibition depicting the inhumane atrocities committed by the Ethiopian colonial forces against innocent Eritrean nationals opened yesterday in connection with Martyrs Day commemoration. The Minister of Education, Mr. Semere Russom, opened the exhibition being staged in front of the Education Ministry’s building.

It portrays the barbaric massacre committed against an Eritrean family around Gejeret here in the capital in 1975, in which 5 family members of Mr. Abraha Woldu, including the father and the mother along with 3 children were inhumanely shot to death. Another 23 innocent citizens were also massacred in that night around Gejeret simply because they were Eritrean nationals.

Ms. Liya Abraham, a daughter of the victim’s family who was in another place with her husband during the massacre, said that the barbaric atrocity committed against her family is the continuation of the brutal policy pursued by the Ethiopian colonial forces. She further expressed pride over her family’s martyrdom, as achieving independence requires paying heavy sacrifice.

Artist Gidei Gebremichael who prepared the exhibition pointed out that the history of Mr. Abraham Woldu’s family is equally shared by each Eritrean family and that we can only honor the trust of martyrs through redoubling endeavors towards building a developed and prosperous nation.

The exhibition would remain open to the public until June 20.

Over 92 million Nakfa Paid in Benefit Scheme to Martyrs’ Families