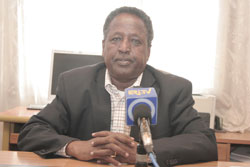 In the evening hours of June 19, tomorrow, every Eritrean national would light candles to commemorate their beloved heroes who paid their dear life for the freedom of their people and country. It is a day in which to express respect to martyrs and also an occasion to renew pledge to live up to their trust. The next day, June 20th, official day of the commemoration is also dedicated to honoring the selfless act of the martyrs. However, Eritrean martyrs are not remembered only on the official day, their memory is a living monument in the heart of every Eritrean. The continued support extended to families of the martyrs as well as the nationwide development endeavors clearly demonstrate the commitment of the people and Government of Eritrea to the pledge of their fallen heroes. The General Director of Social Welfare Department at the Ministry of Labor and Human Welfare, Mr. Mihreteab Fessehaye, conducted a brief interview with Shabait in connection with the Martyrs’ Day. Excerpts follow:

How would you describe the significance of Martyrs’ Day for the Eritrean people?

Every Eritrean believes that their freedom as well as their very existence is a gift from the martyrs. This in turn has led to the commitment of every national to honor the martyrs’ pledge.  This has promoted a strong sense of self-reliance and added impetus to the ongoing development drive and safeguarding the nation’s sovereignty. For this reason, we do not remember our martyrs only on June 20, but in our daily life, in any gathering or national holyday. June 20 – highlights the history of Eritrean bitter struggle, resistance and victory – it is a day in which to bequeath the legacy of proud history to younger generations.

Would you please explain to us the government policy regarding the support of martyrs’ families?

I think it is important to mention the culture of Eritrean people to live together and help each other before we speak about the government’s policy. The families of fallen heroes are the pride of the nation and they are part of every Eritrean family. In addition to the support extended by the Government, the peoples’ support represents the pride over their martyrs. The Government had issued the proclamation of 48/1994 to pay 10,000 Nakfa to the family of each fallen freedom fighter.  In addition, the government has also extended support to the families of those who were martyred in safeguarding the nation. Thus, supporting families of fallen heroes is a responsibility shared by both the people and government as a top priority.

Explain to us the activities carried out by the Government so far?

As I have mentioned above, the Government’s task to support these families was embarked on after few years of independence. The undertaken efforts demonstrate to what extend the Government has succeeded in implementing the plans it drafted regarding martyrs’ families. The clear documentations of personal profile of these martyrs during the harsh situation was very essential factor in gathering information about their families. So far, the Government has paid about 2 billion Nakfa to these families.  On top of this vocational trainings are also provided for offspring of martyrs to enable them to improve their living standard.

What about the role of the people?

It is difficult to evaluate the people’s support in terms of money. Their support isn’t restricted to financial support but it also provides moral and physical support in daily activities. In all semi-urban and rural areas, the moral support of Eritreans inside the country and abroad merits much appreciation. In urban areas specially, the residents take their own initiatives to enable these families to become self-supporting at individual and organizational level. Eritreans residing abroad were also organized in groups to extend support for two years and come to the Homeland meet with these families.

What activities have been done to rehabilitate children of martyrs?

A total of 121 million Nakfa has been donated in to the Martyrs Trust Fund from 2003 until 2010. Besides, the Ministry of Labor and Human Welfare provides the offspring of martyrs the required training and support so as to enable them to become self-supporting. This program has made great contribution in nurturing educated, healthy, self-disciplined and independent youth.

Can you tell us some of the future plan of the Social Welfare Department?

Public support to martyrs’ offspring and families together with Government’s assistance has accommodated these families with basic needs. The Ministry would continue the rehabilitation program of martyrs’ children, besides other supporting programs to make them self-supporting.