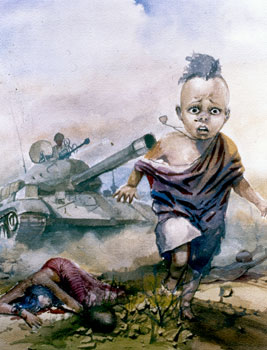 It is very difficult to keep bitter memories for a long time. Mankind by nature is inclined to forget, lest too much remembering renders one to live in the past with a complete ignorance of the present and the past –and makes one blind eye to hope and prosperity. Nonetheless, turning back to look at the past and accounting for the good things at present means honoring those who have put themselves at danger and sacrificed their precious lives and limbs for our sake. For in every house and family, the inevitable has taken place.

And yet sometimes we tend to forget that the price they paid was too heavy. Some families have lost their only next-of-kin. There are many amongst us who have paid the price, fathers who have lost their sole offspring’s, widows who have lost their only solace, the bride which has lost her only comforter and a child who will never get to see his parents again. Colonialism induced hardships did not only severely fraction the population of Eritrea with all their effects, but also caused an irreparable social and psychological trauma, adversely affecting our socio-economic formation as well as our social-fabric. It sought to destroy family ties and values on top of obliterating cherished traditions and values. All in all, it has left a scar that is going to take all eternity to heal. The trench lines that stretch for miles along the length and breadth of Eritrea today are silent witnesses to the untold miseries suffered and the great sacrifices made. Every stone in Eritrea has been sanctified through the blood of our martyrs. In the words of the late Winston Churchill, “never in history was so much owed to so few by so many.”

An account to document all sacrifices made are too many to detail. But nonetheless, it would be doing a disservice to all those who passed handing us our liberty if we kept quiet. Suffice it to mention here that one example will be dealt with in order to illustrate of the intensity, carnage and wanton destruction perpetrated by the Ethiopian colonizers. Eritrea is one of the world’s newest states, having been created in 1991 at the conclusion of a thirty-year war of independence waged against Ethiopian colonial regimes. In the 1950s’, as an early and important accomplishment, the United Nations rejected both Eritrea’s bid for independence, opting instead to federate the country with Ethiopia in 1951. It did not take long for the Ethiopian Emperor Haileslassie to systematically undermine this agreement, and annex Eritrea. This prompted the birth of the Eritrean liberation struggle. In their efforts to quell the Eritrean insurrection and fully subscribing to the belief that if one wishes to kill all the fish, then he has got to dry the pond, the Ethiopian authorities resorted to medieval gore and cruelty. They committed atrocities in the scale that would be classified as genocide in modern terminology in places like Ona, Besigdera, Agordat, Adi-Keih, Digsa, Weki Dba, Tera Imni, Om Hajer, Hirgigo, Wolki, Hazemo, Mendefera and She’eb among many others. Everyone knows that our independence came after a bloody armed insurrection.

The freedom fighters fought and paid for every inch of Eritrean territory, scoring victories battle after battle. And denting the morale and fighting capacity of the enemy each time they engaged it. While they paid a price doing it, the civilian Eritreans also paid a price as they became the punching bag of the enemy each time they were defeated. One such case is She’eb. What happened there 22 years back illustrates the fact that Ethiopian colonizers did not bother in making distinction between civilian or military targets but rather indiscriminately targeted Eritreans in both urban and rural areas, in a futile effort to stamp out the liberation movements through a military means. They have engaged in a premeditated mass murdering spree all over Eritrea during their stay here. They resorted to killings of substantial numbers of Eritreans who were unarmed, defenseless and helpless. This is a memory that is going to take a while to be forgotten.

The story of She’eb is different in a sense that the people who were murdered there were not combatants but rather innocent and unaffiliated men, women and children. They were killed in a despicable manner. They were crushed alive with tanks – a display of the cruelty and unwarranted violence perpetuated by the Ethiopian regimes. One eventful morning on Thursday May the 12th, the people of She’eb were made to suffer unbearable atrocities. The Ethiopian soldiers had planned the event well in advance, in a special meeting; the Ethiopian officials decided to transfer a garrison that was meant to carry out the plan to the environs of the village. They meant to wipe out the entire population of She’eb. And the crimes of the residents- they were suspected of being sympathetic with the liberations movements and were to be made an example to others. Although the residents of the village saw the soldiers approaching in the direction of Shebah and Gedged they had no idea what the soldiers had in store for them.

The massacre took place right after the defeat of the Ethiopian Army in Afabet. After the EPLF wiped out the Nadew Command and scored an important victory against the enemy, so much was the humiliation suffered by the enemy following the fall of their great stronghold vaunted by the Derg’s generals, there was nothing it did not do to save its face. One of these was an engagement in indiscriminate killing and carnage. The bullets and bayonets supplied by the Soviets found civilian targets. Over 400 innocent victims perished one eventful morning. Omar Ali Hamid Cheway, a survivor narrates his experience. He left early in the morning to buy some supplies for his family from Dibnet-Dge. “I was able to somewhat escape through the help of God from a probable extermination where my father, brother and the whole village were crushed under tanks.” As Hawa Hassan Nuray remembers that day her eyes swell with tears. A picture of infants and elders sitting under a tree flashes in her mind. A tank came rumbling and run over the bodies of crying and groaning victims. She remembers running without looking back. Idris Mussa Jabray, starts recounting the events saying that words can’t even come close to describing half of what happened there. He recounts that uniformed soldiers marched into the village and started pushing doors down.  They pulled out all the men and the boys and told them to run while at the same time gunning them down mercilessly as they ran with automatic weapons. The ones that the bullets failed to kill met their end either under the tanks or the ghoulish bayonets.

The massacre was so premeditated and the Ethiopian soldiers have thought of it all. They placed gunners at each side of town whose sole job was liquidating anyone who tried to escape the massacre.  Adem Mohammed Ali had heard the troops approaching from Dbet. He tried running away to Giéneb. But he was caught by the soldiers and was forced to sit down. After he and others were made to sit down, the soldiers overrun them with a tank. “Our cries for help, mercy and compassion fell on deaf ears. They were even laughing at the sight of us dying. Ali Grah, Humed Suleiman, Idris Adem, Mohammed Adem and four other women were crushed and died on the spot, while I run away under the barrage of bullets to safety.” He remembers. At this juncture, it is important to remember that many sacrifices were made not only in the valleys and hills of Eritrea, but also in villages, cities and towns. Many clandestine members from the cities, supporters and sympathizers have sacrificed their lives for freedom and the common cause.  The enemy did not make any distinction as to sex, age and ethnicity when it came to imprisoning and killing.

The flame of revolution to colonizers sought to extinguish only ended up being a fire that burned them down and shook their foundations. During the 30 years of armed struggle for liberation, the fighters had never, for a moment, wavered in their determination to achieve freedom at all costs. It was this fight against all odds that ultimately brought victory and lasting peace to the broad masses. Hence, our task is to remember our martyrs not only by lighting candles and planting trees and making pledges but, above all, by honoring their trust: that of rebuilding the country for whose freedom they paid with their lives.