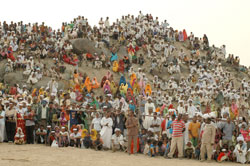 Martyrs’ Day, June 20, was commemorated with patriotic zeal nationwide as well as by Eritrean nationals abroad under the theme “She’eb: A Commemoration That Reinforces Martyrs’ Trust”.

Asmara, 20 June 2010 – Martyrs’ Day, June 20, was commemorated with patriotic zeal nationwide as well as by Eritrean nationals abroad under the theme “She’eb: A Commemoration That Reinforces Martyrs’ Trust”.

In the official commemoration event held in She’eb where over 400 innocent citizens were viciously massacred on 12 May 1988, participants marched to the newly erected martyrs’ monument early in the morning, while President Isaias Afwerki, Ministers, Army Commanders, PFDJ officials, conducted a hike accompanied by the marching band in honor of the day.

In the speech he delivered

following the official inauguration of the monument, President Isaias stated that the staunch patriotism of the Eritrean people in mounting a resolute rebuff against the conspiracies webbed against them by exploitive forces is a clear demonstration of the people’s commitment to the martyrs’ pledge.

The President went on to point out that although not as envisioned, commendable progress has been made in fulfilling the pledge towards the hard-won freedom and the martyrs in the past 20 years while at the same time overcoming unrelenting obstructive hostilities.

President Isaias further added that the commemoration of this year’s Martyrs Day in She’eb, where barbaric atrocities were committed against Eritreans  and also at a time when the country is at a historic juncture in the nation building process, gives the occasion an air of renewed pledge and promise. “Our commitment to our martyrs should be further strengthened through political resolute rebuff and unrelenting devotion to the development endeavors in different sectors,” he added.

Finally, President Isaias emphasized the need for constant and programmed forestation campaigns so as to honor the martyrs and boost national development and wished for promising rains and a bountiful season.

The Administrator of the Northern Red Sea region, Ms. Tsegereda Woldegiorgis on her part pointed out that the commemoration of this year’s Martyrs’ Day in She’eb where the enemy crashed down over 400 innocent civilians under tanks 22 years ago makes the occasion a unique historical event. “However, their blood was not shed in vain but served in the realization of freedom,” she added.

During the occasion, President Isaias, the Minister of Defense, General Sebhat Ephrem, Secretary of the PFDJ, Mr. Al-amin Mohammed Seid, Chairwoman of NUEW, Ms. Le’ul Gebreab and the Administrator of the Northern Red Sea region laid wreathes at She’eb martyrs’ monument and planted tree seedlings at the martyrs’ park.

During the event that was covered live by ERI-TV and the Radio Dimsti Hafash, various cultural shows that reflected the She’eb massacre were presented.