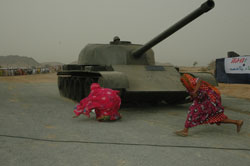 On a Thursday morning 22 years ago, the inhabitants of She’eb— a village in the eastern low-lands of Eritrea- woke to a day that would be one of the most terrible days in the history of the country. That day the inhabitants of She’eb heard roaring sounds of tanks and vehicles making their way out of the main road to the village, suddenly giving rise to an atmosphere of great foreboding. Unable to stomach their defeat in Afabet, Derg soldiers had turned their guns on defenseless civilians. The soldiers made their way to the village with deliberate carnage on their minds and by the end of the morning they had shot, mutilated and crushed around 400 members of the village.

So many families were left without any survivors. She’eb is not the only village that witnessed such brutal mass killing. Ona, Hirgigo, Agordet, Adi-Ibrihim, Habrenkeka, S

hifshifit, Melebso, Wekiduba, Geleb, Ajerbeb, Asmat, and Golij are some among the places that had become victims of the hideous atrocities.
She’eb’s Martyrs’ monument erected in commemoration of She’eb massacre of May 12th 1988 calls attention to the severity of the brutal acts that befell on the entire Eritrean population. List of names inscribed on the marbles of the monument makes one visualize the dreadful atrocities.
On 19th June 2010, the inhabitants of She’eb marched to the martyrs’ cemetery and lit candles in honor of the fallen heroes and renewed their pledge to live up to their trust. There at the cemetery poems that reflect the heroisms of martyrs were recited.
Eritreans pay tribute to the

fallen heroes in different forms and visit their monument traveling for a long distances. Mr. Mehari Haddish, 56, is a veteran fighter who joined the EPLF in 1976. He traveled on foot for 12 days from Katchero – Golij sub-zone to She’eb where martyrs’ day was commemorated at national level and participated in the candlelight vigil. With regards the initiative of traveling on foot for the fifth time to different places of the country such as: Maidima, Shambuko, Senafe, Adibegio, and this year’s travel to She’eb, he said “I planned to travel from Omhajer to Mendefera, but later I changed my mind and made my destination to She’eb as soon as I heard Martyr’s day- June 20- would be commemorated there at a national level.”
If not beyond their capability the people of Eritrea are always committed to pay tribute to the fallen heroes with whatever resources at their disposal. Speaking about what motivates him to travel for such a long distances, Mr. Mehari said that because he is unable to visit the families of each martyr, he decided to visit them in their cemetery and converse with them spiritually. “I feel honored and it gives me moral satisfaction to travel through the roads of the liberated areas that are now secured with their blood, carrying and waving the flag to which the martyrs’ have given their lives for,” he elaborated.
20th June 2010 the commemorative event of Martyrs’ Day begun before sunrise. President Isaias Afwerki, together with high-ranking government officials and army commanders marched to the newly erected She’eb martyrs’ monument.
In the commemorative event different cultural shows were staged and poems in Tigrinya and Arabic languages were recited. Mohammed Al Hajj Mussa’s poem titled She’eb la kamisa highlights the bitter atrocities committed upon the Eritrean martyrs. It also emphasizes the brutality of the very black Thursday.  It pointed out the blood of the martyrs’ was spilled for

the very cause of freeing Eritrea but it remains non-stagnant the same as the waters in the seas and oceans.
In a speech he delivered at the occasion, President Isaias pointed out that the commemoration of this year’s Martyrs Day in She’eb, where barbaric atrocities were committed against Eritreans  and also at a time when the country is at a historic juncture in the nation building process, gives the occasion an air of renewed pledge and promise.  The president also added that the pledge to the martyrs’ is not expressed merely in words, but would be reinforced through the implementation of various developmental programs in different sectors that would be backed up through relentless efforts.
The commemorative event was concluded with the inhabitants of She’eb and participants from different areas visiting to the monument.
Share FacebookTwitterGoogle+ReddItWhatsAppPinterestEmail