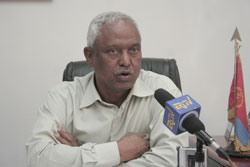 Eritrea would host this year’s under 20 youth soccer match championship of the Confederation of East and Central Africa Football Association (CECAFA).

Asmara, 25 June 2010 – Eritrea would host this year’s under 20 youth soccer match championship of the Confederation of East and Central Africa Football Association (CECAFA).

The Eritrean Sports Commissioner, Maj. General Romodan Osman Awulyay, told ERINA that the match that would take place for the first time in the country would be held in Asmara from July 14 to 28.

National soccer teams under the age of 20 from Sudan, Kenya, Rwanda, Burundi, Uganda, Tanzania, Somalia, Zanzibar and Eritrea would participate in the championship match.

Maj. General Romodan further indicated that the expense of the game would be fully covered by the host nation, and that various committees have been set up for the success of the game. He called on the general public to enhance contribution in reflecting the Eritrean society’s noble values of respect and hospitality to guests from abroad.

Meanwhile, the newly set up committee under the leadership of the Sports Commissioner held a meeting on June 25 to assess the tasks so far accomplished.

In related news, the General Secretary of CECAFA, Mr. Nicolas Musoni, who is here in the capital to observe the infrastructure facilities put in place and the preparations being made in Eritrea, held talks with Maj. General Romodan Osman Awliyay.

Wildlife and vegetation resources being restored in Anseba region