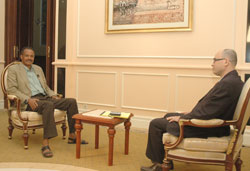 President Isaias Afwerki said that a meeting aimed at further enhancing Eritrean-Egyptian relations would be held in Asmara shortly, in continuation of the bilateral discussion conducted in Cairo.  He made the remarks in an interview he conducted today here in the capital with the Egyptian daily, Al-Ahram.

Asmara, 25 June 2010 – President Isaias Afwerki said that a meeting aimed at further enhancing Eritrean-Egyptian relations would be held in Asmara shortly, in continuation of the bilateral discussion conducted in Cairo.  He made the remarks in an interview he conducted today here in the capital with the Egyptian daily, Al-Ahram.

The President indicated that although there exists goodwill and opportunities between the two sides, it is nonetheless imperative to a clear and practical mechanism, and thereby proceed to actual implementation. However, in order to accomplish more coordinated and effective tasks, it is of vital importance that Egypt’s policy on various regional issues should be clearly spelt out so that its non-existent effective role may be revived, President Isaias underlined.

On the issue of the Nile River waters and its allocation, the President stressed the need for rectifying the unrealistic and erroneous

approach through adopting genuine and correct mechanism in the first place. In this regard, he pointed out that talking about allocation short of building the requisite infrastructure and economy is but a wrong course of action. “The issue is essentially that of peoples and future generations, and not of governments,” President Isaias underscored.

He went on to say that attempts on the part of some countries to employ the issues as an instrument of pressure and intimidation, besides forming alliances would only lead to further instability, which in turn would pave the way for  the so-called crisis management.

Replying to a question on Eritrea’s views as regards South Sudan Referendum and possible subsequent developments, President Isaias said that he does not believe that secession is the true desire of the people of South Sudan, and that it has no justification. He further noted that secession would not bring about any blessing to the South Sudan people and that it does not realistically assess future possible dangers. “Nonetheless, the choice remains that of the people of South Sudan; and we do not want to be their substitute,” the President asserted. In this connection, President Isaias explained that Eritrea holds the conviction that the two partners of the Naivasha Agreement need to take patient move through properly assessing the objective situation and its future trends.

As regards terrorism and its dangers, the President indicated that the root cause is political vacuum and instability, and that short of achieving a lasting solution to such a scenario, terrorism would not be put to an end. In this respect, he emphasized the need for tackling the phenomenon from the grassroots, and that the incidence of terrorist acts in different parts of the world is but the byproduct, and not the fundamental cause.