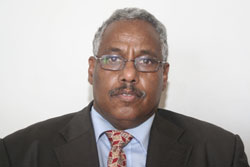 Visitors of Shanghai World Expo 2010 have been highly appraised with the Eritrean Pavilion, describing it as being “unique and attractive.

More than 240 countries, organizations, associations and institutions are taking part at the World Expo being held under the theme: “Better City, Better Life.”

The Eritrean Pavilion featured the charm of Asmara City and the philosophy pertaining to the growth and urbanization of Eritrean cities. The exhibition staged in collaboration with various Government and PFDJ institutions comprise short films, posters, pictures and slide shows depicting the nation’s history, cultural pluralism, social and religious harmony, social justice, environmental protection, artifacts, handcrafts and artistic works, as well as Art deco, tourism and other assets of Asmara city.

Traditional musical instruments, mesob, chair and others are some of the materials being displayed at the Eritrean Pavilion that won broad acclaim on the part of visitors, according to reports.

The number of visitors of the African Pavilion, especially the Eritrean Pavilion, has reached 5 million as of June 21 with a large outpouring of favorable comments from the public, the reports added.

Inhabitants of Tokombia Express Satisfaction with the Newly Constructed Bridge