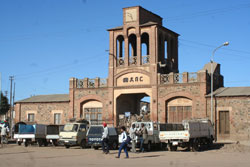 Located in the north eastern district of Asmara, Medebber is sometimes referred to as the Mecca of inventors and modifiers. Craftsmen ranging from teenagers to elders sporting work- uniforms, grabbing tools with their grease stained hands are seen wandering here and there. Some hammer and weld while others stoop over their carpentry machines.

“In Medebber,” says Mr. Said Mohammed Hassen, 86, who’s been working here since 1947, “the word impossible is hardly ever uttered.”

In Medebber, scrape metal is transformed into useful household tools. The recycling of every material from ruined cars into household appliances, oil containers into water containers and washing-up trays, rubber tyres into ropes and sandals, metal sheets into solar-panels are some of the innovations. Medebber’s products, directly or indirectly, have been in use in the most Eritrean households.

“These include modified spare parts for vehicles,” says Temesghen Habte, a regular visitor. “If you’re in need of any vehicle spare part for instance, you can find it here. I think we should encourage and promote inventiveness and creativity of this kind. Every piece of invention that happens here is fascinating. Take for instance a mortar shell which is transformed into an electric comb used in some of Asmara’s beauty salons.”

“Time in Medebber is very important,” says Imam Mohammed, a carpenter. “Every passing second of a working day is wisely used. In most of the stalls, one hardly sees a worker wasting time. We keep hearing that the Germans and the Japanese are known for their workmanship. Well, at least we Eritreans have our Medebber. With its apparent shortage, cramped area and unplanned structure, it’s where great innovation takes place every day.”

I saw Yonas Hadera stooping over a metal cutter in his dingy and crammed stall, a father of five, he earned a diploma in General Metal Work from Asmara Technical School. So far, he has produced 12 machines which otherwise would have been imported. He has showcased many of his machines at the Expo grounds in the Annual Eritrea Festival which he says was, “ a perfect platform for innovators to exhibit their works.”

22 years ago, he made his first innovation by transforming an electric powered “shoe presser” – Pressa in Italian – to water powered one, though almost obsolete nowadays, shoe pressers were use to press the upper part of the shoe against the sole.

Later on in his career, he manufactured a number of machines which include one that makes corrugated sheets, a bread and pastry slice, various stoves, a multi-faceted carpentry machine, brick making machine, round-bar cutter, machine that makes roof fencing net and more.

Most notably, Yonas made a machine that grinds and compresses dry garbage such as leaves into compact fire wood. In eight hours, the machine can produce 12 quintals of firewood. He has also manufactured an animal feed processing machine capable of producing 15 quintals of animal feed per hour. To import such machines would have cost a substantial amount of hard currency.

“But why should we waste that much hard currency when we can manufacture these machine in Eritrea,” Yonas says. “To date, the Ministry of Agriculture, IFAD and a private entrepreneur have been some of the beneficiaries.”

Seid Osman Enkr has run his family stall in Medebber for over 40 years. He started working there when he was eleven. Now his stall produces the reputable Jara and Jebenas. Jara is pot made of bronze used to boil the broad bean dish locally referred to as foul. “The Jara needs unique skills to produce as the making determines the taste of the foul,” says Said Enkr.

“Enkr’s Jara is coated with a substance which prevents the foul from spoiling,” says a snack bar owner Jaber Mahoumed, ex-member of the Asmara Theatre Association.

These days, Jaras are made of aluminum and are imported from Saudi Arabia and Sudan. “But still, our products are still highly competitive and we used to export as far as Ethiopia in the past,” says Said.

The Jaras made at Enkr’s stall vary in size ranging from small ones that hold five liters to extra large ones that can hold forty liters. Many of the popular Asmara snack bars use Enkr’s Jara.

Ghidey Issac, 27, is one of the first ladies to break into Medebber despite the status quo where only men ran and managed the stalls. “It was my burning desire to get involved in craftsmanship that led me into Medebber 15 years ago” says Ghidey.

During her first years, she was simply helping her family. But later, she transformed herself into a fully fledged metal worker. “When my three brothers went to the front, I began to run the family stall. Later on, a number of female workers started to work here in various capacities.”

Medebber is not only a site of manufacturing but also a hub for hand-woven textiles in the city. Traditional outfits like Zurya, Tilfi and Gabi are woven there.

According to Mr. Yishak Yosief, author of Zanta Ketema Asmara- History of Asmara- published in 1993, the place where Medebber and Geza Kenisha are now located was named as May Shingyat during the establishment of Asmara. During the Italian colonization of Eritrea, Asmara was divided into two sections with the area reserved for the Italians, called the Caravanserai. Medebber was one of the five native areas that included Abashawal, Geza Banda Habesha, Geza Brhanu and Hadish Adi Debalko.

Prior to its establishment as a market place for the natives by the Italians in 1914, Medebber was inhabited by people from Arbaete Asmara who later moved to the current location. Medebber later became a center for traders who came from as far as Ethiopia to buy and sell grain, spices, butter, honey and other commodities with the natives.

“In return, these traders went back home with household appliances, farming tools, clothes (abujedid),” says Mr. Seid Mohammed Hassen. “Later on, Medebber underwent several changes and severed differently under different colonial periods. During the British Military Administration, Medebber was a place where secondhand household utensils and materials were displayed for sale to which the natives referred to as ‘ Ujate Uzato’.

It was during the federation of Eritrea with Ethiopia that people began to get involved in craftsmanship. Since then, household utensils and appliances, construction materials, farming tools and others have been manufactured in Medebber.

Medebber is located in the “Historical Perimeter” of Asmara, which is an area of 8 sq.km designed by the Cultural Assets Rehabilitations and Project (CARP) as a historical perimeter around the heart of Asmara. The project, with a mandate to coordinate and oversee the identification and preservation of Asmara’s cultural heritage, categorized important buildings within the Historical Perimeter into three classifications.

Medebber is in C2 category and according to directives; any refurbishment of the site can only be performed partially in order to prevent its original beauty from being completely altered.

Our Youth, Guarantors of Our Future