“Education for All” Winning Over Illiteracy 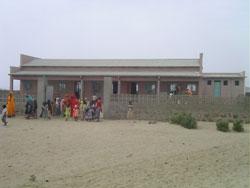 The expansion of equal access to education throughout the country and particularly to the remote areas such as most parts of the Southern Red Sea Region is a major priority to the realization of which the government of Eritrea has been extending concerted efforts.  Even though very challenging to meet, as part of the desired goal of providing education to the entire Eritrean population, commendable achievements have been registered in providing broader access to basic education especially in the deprived areas of the region.

The number of educational institutions has shown a sharp increase in the post independence period. For instance, there was only one school available in Are’ata though increased to 12 at this time. In the central Denkalia the number of schools has increased from one to five, and in the southern Denkalia form three to eight.

Having access to educational services in general and pre-education in particular was mainly confined to Asseb. At present, however, since around 20 kindergartens have been constructed through Rural Community Care Givers (RCCG) program, children’s participation in elementary schools have been showing tremendous progress compared to the days before the construction.

Providing free and compulsory access to basic education mainly to the most disadvantaged areas with a special focus on female students has shown considerable improvement. Twenty two semi-boarding and other three permanent boarding schools have been opened.  Some areas that had not been provided with middle schools have been able to take advantages of the already established boarding schools where the students could get free educational materials.

As a pilot project a community library opened in Harsile has been giving service to the inhabitants of Harsile and its environs. In the region, remarkable progress has been achieved through illiteracy eradicating programs that was first introduced in 1995 in five centers which at present grew to 51 centers.

Material and financial support have been extended to encourage the participation of female students. Make up classes in English and mathematics courses have also been given through the collaboration of the NUEYS to those who lag behind in their educational performance.

As mentioned earlier major achievements have been achieved in providing access to basic education that was inclusive of different age groups. However, the desired goal   has not yet been achieved as planed due to remoteness of some areas form schools in one hand, and pastoral livelihood of the inhabitants of different administrative areas on the other.

Noting that the need for the establishment of mini-libraries in the rural areas and the distribution of reading materials in order to maintain the already achieved progress in illiteracy eradication, Mr. Nur Ahmed, Head of Basic Education in the Southern Red Sea Region, pointed out that effective and intensive crash course programs should be introduced in the remote areas.

According to Mr. Nur Ahmed, teaching in mother tongue especially at the elementary levels plays a crucial role in the transmission of and deciphering capability of the students to the subject under discussion. In effecting the illiteracy programs students who completed their secondary level or junior school should be made to participate in solving the deficits of teachers while assigned for students’ summer work campaign.

More importantly incentives in kind and finance should continue for it would help in securing the sustainability of the illiteracy programs. Even though necessary for all-age groups, access to basic education should focus on children learning as regular students   and on those who have not gained the opportunity in their 10-14 years of age before it is too late.