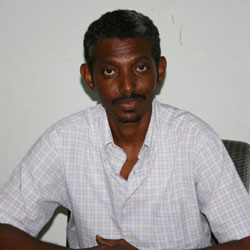 The principal objective of the National Union of Eritrean Youth and Students (NUEYS) is to cultivate competent and dynamic youth that are equipped with appropriate knowledge in varied disciplines. Youth that could play active role in different activities that correspond with the overall endeavors of the nation-building process. In accordance with the basic principles of the union, its branch offices in the six regions of the country strive for laying a foundation that could contribute in stepping up Eritrean youth’s full potential. Shabait conducted a brief interview with Mr. Ismail Mussa, chairperson of NUEYS branch office in the Southern Red Sea Region (SRSR) about the different activities of the regional office. Excerpts follow:

Tell us about the overall activities of the NUEYS branch office in the SRSR?

The vision and mission of the NUEYS is cultivating competent youth.  In this respect, the branch office in the SRSR has been engaged in the realization of the union’s comprehensive goal. As a regional branch, its offices have been extended into four sub-zones that comprise twenty-nine sub-branches. Members of the union in the four sub-zones include branch offices for the organizations of youth workers, students, and youths out side of the two organizations.

In the three organizational capacities, the union gives services in education, provides different trainings, and encourages the youth to engage in sports, health related activities and also cultural programs. Even though there has been active participation of the youth in almost all fields, however, for obvious reasons, sports activities are highly seasonal in the region due to the hot climatic condition. For about eight months, the activities are usually limited to educational activities in which young people are motivated to join different clubs that deal with political, cultural and socio-economic activities. On top of this, the union is working hard to develop work ethics and reading habit among the students.

What can you tell us about the students who participate in different talent contests such as music talent and different cultural shows representing the SRSR?

There is a highly organized arts program at regional level that is regularly conducted in all sub-zones. In Asseb sub-zone, for instance, arts programs have been held weekly where as in the rest three sub-zones of the region the arts programs have been held monthly in which poems, short stories, songs and other talents are staged. Besides, two traditional and modern music groups known as Moyayto and Bisha that are equipped with complete musical instruments have flourished at regional level. Moreover, the union has one cultural troupe at each branch of the four sub-zones. Musicians and cultural performers who would participate in big regional or national festivities have been selected from the different cultural groups within the region. The union organizes such programs to enable the youth maintain traditional values in one hand, and encourage them to blend and harmonize the traditional beat with modern ones on the other. With regards motivation, with the collaboration of the Ministry of Information, the union tries to make records and produce video clips to encourage youth activity in music production.  In this regard, eleven video clips have so far been recorded and some song performances staged in national festivities have also been recorded as well.

In what other areas does the union give support to the youth other than cultural aspects?

Enabling young people to become economically self-supportive is one of the major and basic objectives of the union. In this connection, the union gives vocational training ranging form a one-month to two-year courses. Even though limited in scope and resources, members of different organizational groups within Asseb sub-zone have become beneficiaries of trainings provided in wood and metal works, mechanics computer trainings, as well short on-job trainings in management skills with the collaboration of varied institutions. Some youth have been engaged in painting, sculpture, and more recently in invention and innovation activities. Youths acting in such fields have been gaining moral and material support from the union.

Could you put us in the picture about the preparations being undertaken to add color to the 4th Youth Festival that is going to be held in Sawa after two weeks?

Youths of this region expect the coming of the festival in great eagerness. A committee that deals with organizing programs has been set up. Hence, youths of the SRSR would show up in Sawa with inventions and innovations products, traditional and modern music shows, traditional sports activities, a fashion show organized after the local culture of the Afar ethnic group as well as other shows of cultural and livelihoods of the youths of different areas of the region. Modern music shows and also drama performances in English and Tigrigna languages would be part of the program. In academic knowledge and extra curricular activities competition, and other programs organized in Sawa around 350 participants from all walks of life would take part.

There is a regional award known as Fiéma. What does Fiéma mean and what is it aimed at?

Fiéma literarily means peers. It is a youth gathering that is inclusive of both males and females of the same age group from 14-25 years of age. This gathering is practiced among all of the Afar ethnic group and almost in all administrative areas and particularly in Rehayta. Fiéma has a cultural base through which the Afar people cooperate in various communal activities. NUEYS finds Fiéma to be very crucial and adopts it with out and any change. The award has been designed to encourage students achieve educational excellence. With a view to boost students’ educational performances better, and to help them become more interested in their educational pursuit, the union introduces such an award that is granted for the third time to outstanding students who excelled in the 8th grade general examination.

What are future plans of the union in the region?

In the 4th youth festival in Sawa and the national festival that is going to be held in Asmara, the NUEYS of the SRSR would play due role in presenting traditional sports activity, cultural shows, and exhibitions. The establishment and completion of a youth center in Asseb is also another area which the union has planned to implement this year. What is more, the communities of different administrative areas within the region have been collaborating in the establishment of youth clubs for recreational and educational purposes as well as the construction of new community libraries that are expected to be finalized in the near future.

“Education for All” Winning Over Illiteracy