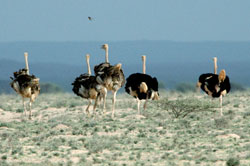 Eritrea used to be rich in wildlife resources, but owing to successive colonial administrations followed by decades of war and persistent drought, this valuable resource never had the chance to follow its natural course of existence. War and drought are as catastrophic to wildlife as they are to human beings and they are the causes of dispersion and disintegration.

However, if human beings enjoy peaceful and stable life, wildlife also is positively impacted by such a situation and no doubt could it sustain itself for eternity. It is only when every Eritrean: farmer, herder, military, civil servant and generally the entire population protect this natural resource and consider it as a national heritage that it could be naturally sustained. If wildlife is conserved and, whenever circumstances allow, sustainably utilized, its economic, social and cultural contribution to the nation could not be underestimated.

Moreover, since we hold this resource in trust, we have the moral responsibility to transfer it to future generations. Our wildlife resource has been very resilient to challenging situations in the past and if at present, some of our wildlife species go extinct because of our irresponsible acts, who will be the culprit? It is this generation, and that would not certainly be a history of pride. For purposes of enhanced knowledge, let us evaluate the current wildlife situation in our country. Where do species like elephant, wild ass, greater kudu, gazelle, warthog, leopard, etc. stand at present? What are the plans and programs put-in place by the government to conserve and augment the population sizes of these species? What should be the role of our people in this endeavor? We will try to answer these basic questions in a summarized manner.

SPECIES THAT ARE INDANGER OF EXTINCTION AT THE GLOBAL LEVEL.

1. African wild ass {Equus africanus somaliensis)This species inhabits arid and semi-arid areas in the Horn of African countries namely, Eritrea, Ethiopia and- Somalia. It is a critically endangered species at the global level. This concern is at its highest edge in Ethiopia and Somalia, while in Eritrea, the African wild ass is relatively in a better situation. This evaluation is based on studies conducted by foreign professionals and ourselves in the course of the past few years. Therefore, the positive tendency that prevails in Eritrea in relation to the future of the African wild ass, vests on us a magnified responsibility both at the national and international levels. The African wild ass is found in the Northern and Southern Red Sea regions of Eritrea around the Ghel-alo and Tio localities.

2. Nubian Ibex (Capra ibex nubiana)The Nubian Ibex is also a species of great concern at the global level. Even though no serious surveys have been undertaken so far to know about its current status, its presence has been recently ascertained in the North-Western Sahel Region around the Kerkebet area. Its sustained existence could only be assured by our serious conservation efforts. An important survey to know more about this species is envisaged   in   the   near   future   when circumstances permit. The Nubian Ibex is also believed to exist in Sudan along the northern Eritrean border area, but we have no information as to its current situation.

ENDANGERED SPECIES AT THE NATIONAL LEVEL

The number and size of wildlife species we have in Eritrea are very limited. It wouldn’t be an exaggeration to say that all the wildlife species in Eritrea arc endangered given their current situation. Apart from baboons, gazelles and ostrich, (which can be encountered easily, but in limited areas), other species like elephant, wild ass, Nubian Ibex, greater kudu, leopard and many other small mammals cannot be encountered easily, thus require great effort and time. That is precisely why we are insisting on their enhanced protection to enable us to see and appreciate them as our heritage.
1. African

elephant   (Loxodonta africana). Even though elephants are “plenty” in other African range state countries, their number in Eritrea is a cause of concern because there are just a handful of them in one locality of the country. If proper conservation actions are not taken, the possibility of these elephants going extinct from Eritrea is quite great. Moreover, the elephant reproduces every four years, thus population growth is slow. To add insult to injury, farmers and elephants are quite often in conflict because the later destroys the farmers’ crops by eating and trampling. In order to solve or at least minimize this conflict, the government has some mitigation plans which, hopefully would be implemented in the near future. The elephants in Eritrea are one of the most northerly distributed populations in Africa, hence their importance in the scientific domain. Their distribution in Eritrea is limited to the Haikota, Augaro and Antore areas of the Gash-Barka Zone.

2. Greater    Kudu    (Tragelaphus strepsiceros). This beautiful wild animal was one of those wildlife species that occupied valleys and mountainous areas of the country in considerable numbers. Owing to reasons stated above, it had reached the threshold of extinction by the end of the struggle period in 1991. However, during the last decade of independence period, the greater kudu has started to get itself rehabilitated in different comers of its’ previous habitat, but recently, illegal killing has been a phenomenon of concern, and if it is not controlled as soon as possible, this species could be lost for ever. The people and the government should see to it that those few individuals who are committing such an illegal act are brought to justice. Regret after the extinction of a species has no value: we should act now. Wildlife species that are relatively less endangered but, nonetheless, subjected to killing and harassment are Soemmerrings and Dorcas gazelles, warthog and ostrich.

To observe wildlife species in groups and in their natural habitats should, in principle give us pleasure instead of creating the temptation of killing them and eating their meat. At this stage and in the present Eritrean context, they are more valuable when they are alive. This doesn’t mean that they could not be utilized sustainably in the future when their populations exceed the carrying capacity of their habitat. In actual fact, it is only a few individuals that “benefit” from killing wildlife, but it is the entire nation, including future generations that really benefit from wildlife if they are protected and properly managed.

Even though the wildlife resource in our country is relatively poor at present, the government is committed to conserve what is available through the establishment of protected areas. Some of the proposed protected areas which are awaiting implementation are the following.

A. Gash-Setit Elephant Sanctuary. This is an area found in the upper Gash around Haikota, Augaro   and Antore surroundings which has been identified as a sanctuary intended to protect the last remaining relict elephant population in the country. This proposed conservation area is believed to play a big role in solving or, at least, minimizing the conflict between farmers and the elephants.

B. Buri Peninsula Biodiversity Conservation Area. Situated in the Northern Red Sea Zone, the Buri Peninsula is very important in that it harbors the critically endangered African wild ass, ostrich, soemmerring’s gazelle and the dorcas gazelle. Moreover, the coastal area is rich in bird life and the mangrove forests are quite interesting. Since the new Massawa-Asmara road passes through this area, it will make it more valuable from the tourism point of view.

C. The Semenawi Bahri (Green Belt) National Park. This is an area that supports the last tropical montane forest in the country. Leopard, bush buck, bush pig, greater kudu, klipspringer, vervet monkey and a variety of bird species are among the wildlife which inhabit this area. Within this proposed national park, there are areas where coffee and citrus fruits could be cultivated which, for economic reasons, could enhance its importance. This could be an area where nature conservation and controlled cultivation could go side by side without one harming the other.

Role of the People in Wildlife Conservation

The establishment of protected areas should be highly participatory. The surrounding local populations and relevant government agencies should work hand in gloves for the sake of conservation. The simple “pushing people out of a proposed conservation area” will not have a place in Eritrea’s conservation efforts. Conservation programs should be implemented with the full consent and participation of all stakeholders. Eventually, local people have to benefit from their participation in the establishment and management of the protected areas. Conservation plans and programs of the Ministry of Agriculture have well taken into account of the importance of participatory principles.

If the wildlife situation of the country is expected to ameliorate, hunting and killing should stop, and natural habitat destruction should be absolutely controlled. It is no less than crime to push them to situations of further endangerment because of our irresponsible actions. Illegal actions should come under control by the active collaboration of the entire Eritrean population. Even though wildlife conservation is the mandate of the Ministry of Agriculture, the responsibility of safeguarding wildlife is vested on every one of us. What we destroy today will not have a trace for tomorrow, but what we conserve today will be heritage for tomorrow. Thus let our children inherit our wildlife.