A Bright Future Lies Ahead For The Eritrean People In General And The Youth In Particular: President Isaias 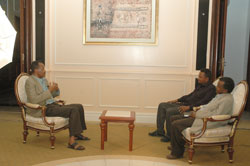 In an interview he conducted with Teatek Magazine of the Eritrean Defense Force Training Center in connection with the 4th ERI-Youth Festival, President Isaias Afwerki said that a bright future lies ahead for the Eritrean people in general and the youth in particular.

Asmara, 6 July 2010 – In an interview he conducted with Teatek Magazine of the Eritrean Defense Force Training Center in connection with the 4th ERI-Youth Festival, President Isaias Afwerki said that a bright future lies ahead for the Eritrean

people in general and the youth in particular.

In his extensive and detailed youth-related replies, the President said that clearly defining one’s vision and objective, as well as striving to this end constitute some of the major values. In this regard, he stressed the need for every citizen to make due contribution in endeavors to nurture a hard-working, educated and skilled youths. President Isaias further underscored that it is imperative to create ample opportunities for the youth who are the backbone of the nation through the coordination of the people and the Government.

As regards the role of the National Service Program and the contribution of the development force in the nation-building process, he indicated that the country is presently standing on reliable ground through resolutely meeting all challenges. Noting that the major programs are the sum total of the accomplishment of small-scale activities, the President lauded the youth for their utmost contribution and dynamic endeavors.

“Those who were shedding crocodile tears claiming that Sawa is irrelevant should now ask themselves how the nation would have fared short of that. Challenges do not unfold on our choice, but are rather externally imposed. However, it is worth mentioning that such challenges have prompted us to put up hard work and become creative,” President Isaias declared.  In this connection, he explained that irrespective of any nature of hostility, one can never flinch from the cherished path as long as there prevails a clear and lofty popular objective. Citing the experience of the armed struggle and the resistance of the Eritrean people,   he elaborated that on the contrary, such dynamic forum would enable one to acquire valuable lesson, on top of becoming ever more creative.

Replying to a question why Sawa always becomes the target of enemy quarters, the President pointed out that this is simply because it is the center in which those who build a nation are nurtured there. Hence, it is also not surprising to witness that those quarters which do not wish to see a developed Eritrea resorting to such wicked ploys, for it is natural for the bankrupt to entertain wicked dreams, he added.

Moreover, in a profound analysis he gave regarding cultural invasion and the campaign of the special interest groups, President Isaias underlined that such a group constitute only a very few section of society and employ various ploys to promote their vested interests through exploiting the sweat and resources of the majority. Stating that such a group engage in substantial investment to deliberately expose the youth to the wild dream of hollow expectations, President Isaias expressed strong conviction that Eritrean youths would rebuff these acts as they are well aware of the wicked intention.