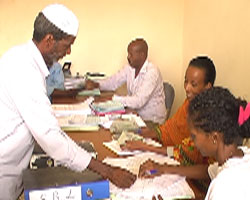 They explained that the loan being extended to them is playing major role in tackling problems they used to face in ploughing due to lack of enough oxen. The farmers went on to say that they are  now able to purchase oxen out of the loan, which in turn is making significant contribution in boosting output.

Reports indicated that a loan amounting from 7,000 to 10,000 Nakfa each was extended this year to a total of 921 farmers in the sub-zones of Adi-Tekelezan, Elabered, Hagaz, Keren,  Hamelmalo, Geleb, Habero, Halhal and Asmat.  It is expected to be paid back within a year.

The head of small-scale saving and credit scheme in the region, Mr. Biniam Yohannes, pointed out that the loan is in line with endeavors to support needy nationals. He further called on all government institutions and administrative bodies to demonstrate due collaboration for the success of the program.

About 31 million Nakfa has been extended in loan , and that there are about 11, 000 customers engaged in big and small-scale business and agricultural ventures, the reports added.