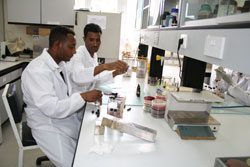 Health rendering institutions and the quality of medications has been showing impressive improvements over the previous years of independence. Parallel with this having qualified laboratories that support the ever-growing services and that meet international standards becomes a necessity to the realization of self-sufficient health care institutions at a national level. The National Health Laboratory (NHL), previously known as Central Laboratory, was initially situated within the now Orota Hospital and had functioned as the referral laboratory even before independence. At present the NHL has introduced sophisticated and automated laboratory equipments to catch up with the ever improving health services in the country.

There are health laboratories throughout the country that are rendering efficient services, however what makes the NHL different from the other labs of the referral hospitals in each of the six regions is that it serves as a standardized and regulatory laboratory to the others.  Experiments and special screening cases that are beyond the capability of the other labs are finalized in the NHL.  Moreover, it serves as a training center for practical activities that are related to experimenting and also maximizing health care provision throughout the nation.

The NHL plays a major role in providing diagnostic pathology service and disseminating the information in order to maintain and develop awareness among the general public of the varied health threats.
The NHL comprises of different laboratories of microbiology that is inclusive of mycology and TB referral laboratory, hematology, chemistry immunoserelogy, food and drinks, and pathology department that renders cancer screening service.

According to Mr. Samuel Sahle, coordinator of health laboratories, the microbiology department which is first of its kind in the country receives different cases of blood, urine and other bodily fluids for testing.  This department, for instance, makes intensive tests and systematic analysis on different health problems like urinary system infections that are conducted through culture medium procedures through which the infectious bacteria are made to grow while immersed in urine so as to easily identify respective characteristics of the antibodies and thereby find curative medicine.

Conducting TB culture is not carried out in other health institutions in the country. At present, however, it has been introduced in the NHL. The introduction of TB culture medium helps in detecting and treating illnesses in the best medication approaches. Complicated TB cases that remain incurable due to resistance in the first or second regimen are carefully investigated and experimented by making the bacteria grow in test tubes and also treated with varied medicines to the point of finding an effective medicine.

The hematology department that is armed with supportive equipments deals with checking whether a person has sufficient red blood cells and platelets and other similar tests. Contrary to what has been practiced, at present, testing or screening is conducted within less than a minute owing to automated medical equipments that could finalize up to ten parameters at a given time.

The imminoserology department utilizes standardized equipments that are very effective for screening cases of communicable diseases such as HIV, and STIS. Such tests have been conducted in all laboratories through the rapid test system, where as in the NHL such procedures pass through varied phases that utilize more advanced equipments. Other fever causing diseases such as measles and Rubella are also screened in the imminoserology laboratory. In addition to this new imminoserology equipment that has been introduced could facilitate the demographic health survey related to delivery, and child and mother mortality that are being conducted at national level.
DNA and PCR laboratory services that has been introduced to the county recently are also making due contribution in solving different relevant problems.
In an attempt to determine health conditions of diabetic patients for an extended period of time the NHL has introduced new technichniques for hemoglobin tests. The chemistry department on its part conducts different experiments to see the chemical contents of the human body and especially in   organs such as kidney and liver.

Some blood clotting cases associated with heart illness that used to be sent abroad for further tests are at present finalized here in the laboratory. Besides, some cases of reproductive health and goiter (thyroid gland) related problems were tested with the collaboration of Washington University. Tests for such cases are also being conducted locally.
The NHL also serves as a quality control center for medicines that are imported to the country as well as in conducting inspection of food-borne health threats.