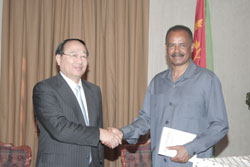 In the meeting at the Denden Hall here in the capital, President Isaias pointed out that relations between the Eritrean and Chinese governments is special and strategic. He further stated that China’s collaboration in the implementation of development programs in Eritrea is not to be viewed lightly.

The President explained that the relations established between the two countries in 1993 is progressing well. President Isaias went on to say that there exist ample opportunities for Chinese companies to invest in various domains in Eritrea, and that the country is ready to collaborate with such companies.

Mr. Li Ruogu on his part expressed the Chinese government’s admiration to Eritrea’s development endeavors and expressed readiness to demonstrate the necessary collaboration in all development programs.

Meanwhile, the Eritrean Ministry of Finance and the Chinese EXIM Bank concluded a loan agreement amounting to 60 million dollars that would be channeled to mining activities.  The agreement was signed by the Minister of Finance, Mr. Berhane Abrehe, on the Eritrean side and the President of the Chinese EXIM Bank, Mr. Li Ruogu, on the side of the Bank.

Likewise, the Ministry of Public Works and Chinese Road and Bridge Corporation signed a memorandum of understanding on ways of fostering bilateral cooperation. The accord was signed by the Minister of Public Works, Mr. Abraha Asfaha, and the Vice President of the Chinese Corporation, Mr. Lu Shan.