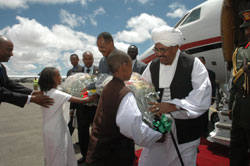 The two leaders held extensive discussion at the State Palace on bilateral relations and its development, the issue of Sudanese unity and the South Sudan Referendum process, as well as the situation in Somalia and its developments.

In the meeting that was conducted in line with the Eritrean-Sudanese special relations and the continuous consultations between the two leaders on issues of mutual interest,  exchange of views was held on promoting development along the common border and bilateral economic cooperation.

In briefings he gave to local and international medial outlets following the meeting, Mr. Yemane Gebreab, Head of Political Affairs at the PFDJ, explained Eritrea’s stance of support to the unity and stability of Sudan. Likewise, he said that Eritrea believes military interference on the Somali issue would only complicate and aggravate the situation rather than bringing about a solution. In this regard, Mr. Yemane pointed out that a lasting peace and genuine solution to the Somali problem could only be achieved on the basis of a peaceful and inclusive dialogue among Somali nationals.

The Sudanese Foreign Minister, Mr. Ali Ahmed Kerti, indicated on his part that Eritrea maintains clear stance as regards Sudanese unity, and that President Isaias continues to make constructive and vital contribution with all the concerned parties regarding the Sudanese issue. He further stated that the Sudanese leader received briefings from President Isaias on current Eritrean-Djiboutian    developments.

President Omar Hassan Al-Beshir left for home in the afternoon hour concluding a one-day working visit. He was seen off by President Isaias on departure from Asmara International Airport.

Construction of major embankments needs to be enhanced in Anseba region, Says Minister

Over 60 people, including Eritrean nationals killed in bomb blasts in Kampala: Reports