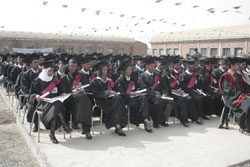 The Halhale college of Business and Economics, 30 kilometers from the capital Asmara held its 3rd commencement on Saturday, 10th of July 2010.Like the other colleges that have been flourishing in the country, the opening of the college was part of the governments long term objective of providing broader access to tertiary education throughout the country with equal distribution in all the six regions of the country. The college began its preliminary academic year in 2004 within the campus of the Eritrean Institute of Technology as an autonomous college.

Including this year’s graduating class, in three batches, the college   has so far graduated around 1,978 students in various specializations. The around 650 graduates of this year are from the departments of Accounting, Business Administration, Economics, Banking, Finance, Management, Marketing, Secretarial Science, Tourism and Hotel Management, as well as Public Administration at degree and diploma levels.

The graduation event has a profound meaning that transcends beyond the transient joy that comes with the official conferral which tied the long awaited educational journey of the students with an award of degree and diploma.  It indeed opens a new chapter, on one hand, for the individual students to achieve much more in a more advanced level of qualification and for the realization of the nation’s overall development plans through their participation in dispensing the already acquired knowledge that could yield tangible outcome at various developmental sectors on the other.

Speaking on the occasion, dean of the college, Dr. Yemane Misgna said that the teaching and administrative stuff of the college would be pleased to see their hard work has paid off. Pointing out that the college’s mission has been to offer a viable knowledge in various fields; he went on to elaborate that it would become a center of excellence and economic research.
At present the college is accommodating around 1,700 students at diploma and degree levels. Dr. Yemane also disclosed that the college is making necessary preparations to

commence post graduate programs in the near future.
The number of students who excelled in their academic performances is indeed really remarkable. Observing outstanding students receive medals, one could simply understand the vibrant outcome of the students in various disciplines.
Yonas  Angosom, from the department of Banking and Finance scored a total grade average of 3.6. He said that he challenged the difficulties he experienced in his academic pursuit through group discussions among the students and also through making extensive preparations. Even though they didn’t deny that they used to experience lack of reference books, the graduates appreciated the ongoing endeavors of strengthening the college with the necessary educational facilities. Melil Tekie from the department of economics who achieved a grade of 3.9 said that the college is gradually progressing in terms of varied facilities.
Her parents Mr.Tekie Andemichaiel and Mrs. Brikti Geberemedhin said that their daughter has been showing admirable performances since her childhood and they expected that she would achieve such academic excellence for she had earlier done it in the national matriculation exam with total grade average of 3.8.  Expressing admiration to the created broader access to higher education, the parents said that the number of graduates has shown substantial growth since the opening of varied colleges throughout the country.
Another graduate, Bethiel Kidane expressed her desire to see the college in which she has earned her first degree in accounting ever-more flourishing.
The event was colorfully conducted with the participation of high ranking government officials, parents, dignitaries, and invited guests.
Share FacebookTwitterGoogle+ReddItWhatsAppPinterestEmail