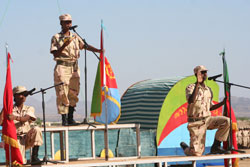 The 23rd round national service members graduated today and the 4th ERI-Youth Festival was officially opened with vivid enthusiasm.

Speaking at the official graduation ceremony, President Isaias Afwerki congratulated all the participants and particularly the youth from abroad saying: “You have made us proud!” He then expressed his appreciation to all those who organized the uplifting event.

President Isaias went on to point out that at a time when today’s youth are being perceived as less responsible than previous generations; Eritrean youths have proven that their strength and steadfastness continues to grow. “At a stage where Eritrea is engaged in the nation building process as well as the national resolute rebuff, young Eritreans inside the country and abroad need to arm themselves with competent skills and knowledge so as to effectively overcome present and future challenges,” he reminded.

Finally, the President called on the youth to strengthen their efforts through making work, knowledge and skills as their primary tools for their objectives and struggle, and expressed conviction that the outcome of their efforts will be evident in practice in ten years time.

The Commander of the Sawa Center of Education and Military training, Col. Ezra Woldegebriel on his part stated that Sawa is not only a testament to the sovereignty of all coming generations but is also a center for cultivating competent youth that are the driving force of the country. He went on to point out that together with the 23rd national services members, Sawa has nurtured 400,000 youths in the past 16 years.

Indicating that Sawa is continuously targeted by enemy forces because it is the center for nurturing youth that are the primary force that are building the nation, Col. Ezra underlined that Sawa will continue to cultivate those who will build Eritrea’s bright future, irrespective of the schemes of disgruntled quarters.

Also speaking at the occasion, the Chairman of the National Union of Eritrean Youth and Students, Mr. Sultan Seid expressed his appreciation to all those who organized the event and stated that Eritrean youth continue to grow stronger in the face of unrelenting hostilities and conspiracies. He went on to emphasize that such hostilities will only serve in further reinforcing the country’s youth.

The event that heralded the graduation ceremony of the 23rd round members of national service and the opening of the 4th Eritrean youth festival was adorned with military parades and cultural shows, while prizes were handed out to students who excelled in their studies and training.

The youth festival in which tens of thousands of Eritreans from inside the country and abroad are participating will continue till 19 July with a variety of activities.