Halhale College of Business and Economics: In Pursuit Of Academic Excellence 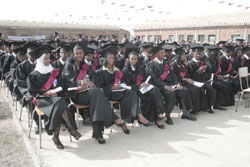 The various colleges of higher education in the country have been showing steady progress in terms of accommodation capacity as well as educational facilities. Halhale College of Business and Economics for instance is one of the seven colleges that have been established in 2004. Besides cultivating productive citizens who could become driving forces for the all round nation-building process, the long term objective of the colleges includes broadening the colleges’ research capacities and making them competitive centers of academic excellence.

Previously located within the premises of the Eritrean Institute of Technology, the Halhale College in 2008 moved to its current location following the completion of the facilities that were under construction. In the early day, the college used to receive second year students that completed their fresh man courses in the EIT.

Regardless of the short comings it experienced in its preliminary stage, the college at this time has been admitting freshman programs depending on its own capacities. In this connection, Dr. Yemane Misgina, Dean of the college said that even though the different colleges use to collaborate among each other, Halhale is now an autonomous college the same as the other higher educational institutions.

The college had limited reference books most of which were moved from the University of Asmara. In terms of text and reference books for researching purposes the college has been demonstrating tremendous progress with an increase of the number of books to 25 thousand. In this connection Dr. Yemane said that the college, in addition to substantial number of books imported by the government has been getting some donations from colleagues and friends form different parts of the world. “The facilities being provided are really extensive and in fact extra ordinary,” he added. The library of the college can accommodate 1,000 students at a given time.
The college mainly depends on local resources be it in the preparation of curriculum and also for other educational facilities. The curriculum that has been developed is mainly demand driven; such as to meet the overall envisaged goals of the country.

In order to upgrade the qualifications of the academic staff, the college has been sending its graduate assistants for scholarships abroad such as to China, and many others are about to leave for Germany. Dr. Yemane also pointed out the college’s endeavors to strengthen relations with some Italian universities. The college has so far sent 13 graduate assistants for masters’ studies. Following which the PHD program would be commenced so as to replace the expatriate staff members. The college has also charted out plans to begin post graduate programs in economics the coming September and the other departments will follow suit as well.

As regards to the future plans of the college, the collage has a lot to put in to practice.  Dr. Yemane disclosed that since running higher educational institution demands huge capital, the college has been extremely dependent on the government for its budgets. Nevertheless, the college would introduce income generating schemes by providing evening training programs.  “In the short term plan of consultancy and research works we are planning to generate 20% of the budgetary demand,” he explained.