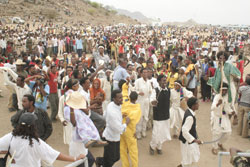 The 4th Eri-Youth Festival which has been underway since 16 July in Sawa Educational and Training Center under the theme “Youth: Pivotal of the Future” concluded today with patriotic national zeal.

Sawa, 19 July 2010 – The 4th Eri-Youth Festival which has been underway since 16 July in Sawa Educational and Training Center under the theme “Youth: Pivotal of the Future” concluded today with patriotic national zeal.

Speaking at the closing event the Chairman of the Coordinating Committee of the Youth Festival, Mr. Zersenai Tesfai, underscored that the purpose and objective of this youth festival is to add impetus to the ongoing building and nurturing of national identity. He then expressed appreciation for those made due contribution for the success of the festival.

Moreover, Mr. Zersenai said that the festival which had provided viable ground for exchanging views and enjoying national culture inside the country has turned the month of July to a month of the youth, and commended the active participation of youth from inside the country and abroad.

Also speaking at the occasion, the Minister of Tourism, Ms. Askalu Menkerios, noted that the various programs presented in the festival through popular participation highlights the image of the future Eritrea. She expressed hope for the continuity of such an event that would furthermore reflect Eritrean unity, resilience and diversity.

During the course of the festival in which about 30,000 nationals took part, seminars and discussions, as well as cultural, artistic and sports competitions and other related activities were carried out. Furthermore, about 25 study papers focusing on history, equality, causes and influences of immigration were presented.

Youths from Sudan, Libya and Egypt who come to take part in the national youth gathering stated noted the advantage of the dynamic role of youths cultivated in academic and military discipline to the all-round national development drive.

In the closing ceremony transmitted live via Eri-TV and Dimtsi Hafash, winners in innovation, creativity, traditional and modern sports, cultural shows from various regions, colleges and schools received their awards from different officials.