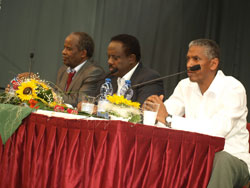 Eritrean nationals residing in Germany conducted their annual festival from July 16 to 18.

The festival in which thousands of nationals and friends of Eritrea participated was officially opened by the Head of Economic Affairs at PFDJ, Mr. Hagos Gebrehiwot.

In a seminar he conducted for the participants regarding the objective situation in the Homeland and the contribution of nationals both inside the country and abroad, Mr. Hagos gave briefings concerning the achievements Eritrea has registered in all domains and the initiatives taken to resolutely rebuff the illegal sanction resolutions against the people and state of Eritrea.

He also commended the contribution and strong resolute rebuff of citizens living abroad, and expressed conviction that they would reinforce their participation.

Also during the festival, a lecture was presented by Professor Berhe Habtegiorgis which held a special message for the participants and added further drive to their initiatives.

The artistic shows, sport activities, children village, exhibition and musical show by artists from Eritrea and Germany staged in the national festival added color to the event.

Meanwhile, the nationals staged demonstration to condemn the unjust sanction resolutions adopted by the US and reaffirmed their readiness to stand alongside their people and government.