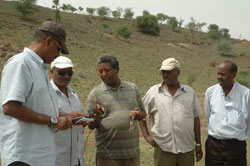 The President began his visit by Tessenei sub-zone on July 18, during which he inspected the construction of major Aligidir Dam being undertaken by Biddho Construction Company in which the greater portion of the project has already been finalized. He also received briefings by pertinent managers of the project on the tasks so far accomplished.

The dam with the capacity of holding about 8 million cubic meters of water is expected to promote irrigation farming in the nearby 4,000 hectares, and that it has so far accumulated 30% of the total amount of water it can hold, according to Mr.  Yemane Gebretinsae, manager of the Tessenei-Aligidir agricultural project. He further indicated that the micro-dam can hold full volume of water up to mid August taking into account the existing good rainy season.

In his 2nd day tour of inspection, President Isaias climbed to the Maeloba Hill and observed the Ketai plains in which plans have been envisaged to put it under cultivation. The President exchanged views with heads of the project on the activities so far carried out and the tasks that need to be accomplished for the success of the project.

He subsequently moved to Jebel Hidud and observed the agricultural activities being undertaken, plots of land for the construction of micro-dam and carrying out farming practices. The President stressed the need for urgent launching the project in a studied and effective manner.

Also in the course of the visit to Golij, President Isaias was accorded warm welcome by the local inhabitants who expressed admiration for his visit to personally witness the implementation of development programs in the area.

He then headed to Gerset and inspected the construction of foam-made 500 residential housing, during which he conducted discussion with heads of the project on ways of speedy accomplishment of the remaining portions.

Moreover, President Isaias visited the Fanko-Tsimue Dam and observed the volume of water it has so far accumulated and the nearby agricultural sites. He highlighted the need for taking serious action towards preventing the cutting down of trees around the dam.

The President also inspected the newly constructed Tokombia- Gash River Bridge through Gedem and Debai-Sima construction companies, during which he exchanged views with experts.