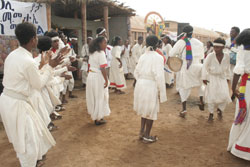 Eri Youth Festival that is held every two-years in Sawa is not merely a celebratory event, but also an occasion where Eritreans throughout the country and from the Diaspora unite together and share experiences among one another.
It is a national gathering that coincides with the coming of Eritrean nationals from around the world for their summer vacation. Participants of the 4th Eri-Youth Festival reached Sawa on Friday 15th of July 2010 and attended the opening of the festival that featured various shows.

The festival was also a good occasion for the graduation ceremony of the 23rd round national service trainees for it provided an added color to the event. There, at the opening ceremony the trainees featured attention grabbing parades, following which different songs and musical dramas were staged. A group of Diaspora youths known as Eri- artist sung in unison Look around you written by Sofia Tesfamariam and to a tune composed by Walid Mensur.

Speaking at the graduation ceremony President Isaias Afewerki congratulated the members, trainers, parents, and teachers, and particularly commended Eritrean nationals residing abroad who participated and added color to the event. The President also emphasized on the need for the youth to redouble efforts so as to obtain knowledge and vocational skills, as cultivating dynamic youths provides added impetuous to the integrated national development drive.

Pointing out that the members of the 23rd round national service have successfully completed their 12th grade successfully while simultaneously remaining adherent to the cherished social values, the commander of Sawa National Education and Training Center, Col. Ezra Woldegebriel on his part said that the center has succeeded in nurturing dynamic youths who honor the martyrs’ trust.

This year’s Eri Youth Festival was celebrated with the participation of expatriot youths form the Sudan, Egypt and Libya. These visitors were highly impressed with the different shows performed in Sawa and particularly expressed admiration to the women’s participation in the national service. These visitors also staged remarkable shows that added further excitement to the event.

Following the opening ceremony, an exhibition that was open till the closing ceremony was included different displays of the youth village, IT, invention and innovation pavilion as well as exhibitions of Sawa Center for Vocational Training, and institutions of higher education.

Different traditional sport activities and cultural shows were also part of the programs that were presented during the festival. The participants of Eri youth festival were entertained with varied dance and song performances, as well as the livelihoods of the nine ethnic groups.

Seminars and papers on various topics were presented every day. In the seminar he conducted at Sawa, President Isaias emphasized the role of the youth in the nation-building process. He indicated that the youth are actively engaged in the implementation of major development programs, and that Eritrean youths in different parts of the world still maintain strong attachment to the Homeland. President Isaias went on to say that the utmost contribution of parents in nurturing youths who express pride over their origin is among the main f

The Sawa award was also a major event during the festival. President Isaias awarded the prize to Eritrean youths in the Diaspora who exhibited excellence in completing their secondary education. Accordingly, more than 180 Eritrean youths in the United States, Europe, Saudi Arabia and other Asian countries received the Award, during which they expressed special satisfaction.

The festival was concluded with the same zeal as it started with the performances of different songs and musical dramas.  At the closing ceremony regions that excelled in their presentations of varied cultural shows, teams that won on varied competitions and other activities were awarded prizes.