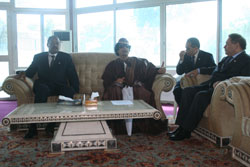 President Isaias Afwerki who is attending the 12th regular CEN-SAD Summit in the Chadian capital of Njamena yesterday held meetings with leaders of various member states.

In a meeting with the Libyan leader Muamar Khadafi and Chadian President Idris Debi, President Isaias conducted discussion on the issues pertaining to CEN-SAD and ways of fostering cooperation and complementarity among members states with a view to strengthening the organization, as well as bilateral relations of partnership and cooperation.

Meanwhile, the General Secretary of CEN-SAD, Dr. Mohammed Al-Medeni Azhari, pointed out that the organization is on the verge of realizing its main objectives through meeting various challenges encountered at different stages. In an opening speech he delivered yesterday, Dr. Mohammed Azhari indicated that the achievements registered as regards conflict resolution and ensuring peace and security among member states on the basis of internal resources is encouraging. He also stressed the need for exerting still more endeavors so as to accomplish greater achievements.  Noting that external interference is further complicating and aggravating problems,  the CEN-SAD General Secretary asserted that the organization, in collaboration with partners, would enhance efforts towards tackling the remaining issues.

In another respect, the Chairman of the CEN-SAD Congress, Libyan President Muamar Khadafi said that CEN-SAD is the foundation and influential body of the African Union. He further underlined that the organization would be an exemplary achievement for the African continent as long as it strives to ensure its progress and the development of member states through effectively utilizing the resources at its disposal, as CEN-SAD has effective role to play in the political, economic and social domains.

Participants of ERI-Youth Festival Highlight Significance of the Event