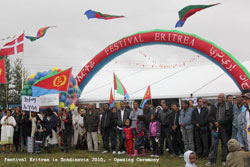 Eritrea Festival in the Scandinavian countries opened yesterday in the Swedish city of Stockholm. The Head of Political Affairs at the PFDJ, Mr. Yemane Gebreab, opened the festival.

Asmara, 30 July 2010 – Eritrea Festival in the Scandinavian countries opened yesterday in the Swedish city of Stockholm. The Head of Political Affairs at the PFDJ, Mr. Yemane Gebreab, opened the festival.

Speaking at the opening ceremony, the Eritrean Charge d’Affaires in the Scandinavian countries, Mr.  Yonas Manna, stated that this year’s festival being held for the 12th time is special as it is being conducted at a time when the integrated national resolute rebuff is ever more strengthening towards annulling the unjust Security Council sanctions resolution against Eritrea. Noting that the awareness of the Eritrean people is much higher than the conspiracy being weaved, he pointed out that the flow of tens of thousands of Eritrean nationals residing abroad to the Homeland to spend their vacation conveys a strong message, besides fully attesting to their potent resolute rebuff.

The chairman of the holidays coordinating committee in the Scandinavian countries, Mr. Alem Teklegergis, said on his part that Eritrea

Festival is becoming ever more colorful thanks to the dedication and active participation of nationals. In this connection, he explained that all the expenses were covered by the Eritrean Community there.

The festival that would continue until August 1 would feature various programs, including entertainment programs for both children and adults, seminars focusing on the objective situation in the Homeland, an arts exhibition prepared by the Ministry of Information under the theme “Journey of Steadfastness for Liberation,” narrative story highlighting the historic Operation Fenkil and the like.