Men, Women And Shopping: Who Does It More 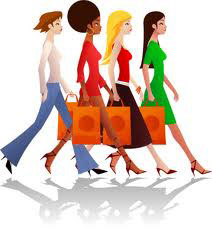 “Why are you bugging me when you spend a lot of money on different unnecessary things,” was my friend’s brother’s defensive argument when ever she tries to scold him for squandering money. But it is not only my friend’s brother who thinks this way; the majority of the male species are of the opinion that women spend more money than men. I beg to differ.

My friend and her brother have heated arguments over the issue of money constantly and every time I see them, I end up wondering why would every one think that women spend a lot of money on themselves? Many of the women I know would firmly oppose the commonly held believe that women like to spend more money than men.   Some would even argue that men spend their money on many unnecessarily boy toys, like a new model car, CD players, games and many other stuff and still blame women for spending more money on themselves. My friend’s brother claims that with her collection of shoes and bags, he would have opened a small boutique. However, a recent study by Morgan Stanley Consumer Banking shows that men spend 57% of their income on themselves where as women spend 37% of their income for the same purpose. The study also shows that men spend four times more than women do especially than their partners. This recent study proves the stereotype women spend more wrong.

On the other hand women also seem to agree that they spend more time on the weekend shopping for clothes and groceries for their families. But they also believe they do these things not just for themselves but for their entire families. And women who stay at home have to clean the house, bring and take the kids to and from school, arrange clean clothes for the children and clean suit for the husband and of course put food on the table at the appropriate time.  To do all those tasks at the right time, a woman needs all the technology available in the world such as a washing machine, groceries, detergents….and the list goes on. They buy all these items to make the house clean, inviting, warm, and to keep the family healthy and content.

Another study from India proves that men tend to spend more than women; this study not only proves the amount of money spends by men but also the amount of time spent on shopping by men.

Others argue that women spend more depending on the season they are shopping in. Take Christmas season for example where more women tend to shop more and this is merely because they are more caring and responsible than men are. There are also few that say women by nature like decorated and comfortable environment and one of the methods they use to transfer their environment warm and comfortable is by filling it with new things or by redecorating it which needs new things and results to the conclusion that women spend more.

Despite the above mentioned facts, a market research outlined that women in general are not good at saving their money and use more funds to update their life styles. But what needs to be noted here is that the women updating their lifestyle with latest electronic and home gadgets are also benefiting their families. Men don’t have to spend on household items because their wives are doing it for them. If the men would start trying to make their homes more warm and beautiful, then women wouldn’t have to go to the extent of drying their saving to redecorate their houses or update their lifestyles. I don’t mean to imply that there is no man in the world who decorates his house or make his house warm and comfortable and that there are no women who spend every penny they have on clothes, shoes and of course makeup and nail polishes. But those women are the exception and they do not represent all women.

The point here is that there is no relation between money and gender. It all depends on the type of the person. I believe it all depends on one’s life style and way of managing money.