An Effort that Needs Encouragement 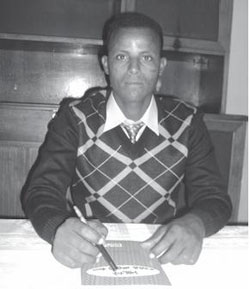 People who translate books they appreciate into local languages so that many people could read it and enjoy and learn from it are loving people”, says Mr. Beyene Haile. Mr. Beyene Haile, the author of many books, said this comment during the launching ceremony of a new translated book at Ambasoira Hotel on Thursday 29th of July 2010. The book “Confessions of an Economic Hit man” that reveals the secrets how the world super powers try to control resources of the developing countries through what they call Economic Hit Men.

The Economic Hit Men are people specialized in different disciplines and are dispatched to different countries as economic and political advisors. Their mission is not to advise governments of developing countries on how to develop their economies and feed their people but to assess and look for cracks and ways on how to make those weak governments obedient and submissive to their flagrant economic interests. The job of these economic hit men is to report to their government the abundant wealth and natural recourses of those countries and provide advise on how to benefit from them.
The grabbing of the natural resources is also done through different means. Direct involvement through means of force like that they did in Panama; through putting government into loans that they could never pay back; encouraging coup-de-tats of government they believe they are tuff to deal with; and convincing governments that their infrastructure building is the best and involve themselves in building infrastructure that during the need of renovations their expertise is only available to do the job. These are few examples on the real activities of Economic Hit Men.

The author of the book, Mr. John Perkins was an economics graduate from University of Boston. His first assignment was to Ecuador in 1968 as a member of Peace Corps. In Ecuador he was not doing his job he was assigned for as a member of the Peace Corps, he was rather paying his full attention on the wealth and resources of the Amazon area. It was from here that he fall in the eyes of the US law makers and international corporate. In 1971, Perkins was put into training of an economic hit man and upon finishing his training he was assigned to Java, Indonesia, along with other eleven economic hit men.

From this onwards he had the chance of working as an economic hit man in Panama, Saudi Arabia, Iran and Venezuela. Through his book “Confessions of an Economic Hit Man”, Perkins reveals on how the different US administrations have been doing to manipulate governments and grab all the natural resources they possess, including oil. The book is written in English and has enjoyed a large circulation in all over the world. Tesfaghabir Berhe, a young Eritrean, very much enjoyed the book and decided to translate it into Tigrigna language so that people who have not the chance to read it in English could read and understand what the techniques were and are employed by some super powers in a bid to control the resources of developing countries. It took Tesfaghabir almost two years to translate the book.

He finally succeeded and the book is already in the market. The book is educational in a sense that it develops the awareness of people to be vigilant and watchful to those who come with their ill intention to spread hostilities and mistrust among people of country with the only intention to get an excuse to come inn and exploit the situation to their interest. It is also educational in a sense it teaches people that all that come in the name of assisting and helping hands are not always true to their words. What they say and would like to make us believe is not the real of them. There is always a hidden agenda behind them.

The book is informative that it tells the story on how the super powers have been able to manipulate, replace and black mail governments so that they become submissive and obedient to their never satisfied economic interests. The book is worth to read and the translator Tesfaghabir Berhe should be appreciated and encouraged so that he will keep up them job and come up with many more books of interest to the public.

Eritrea Festival 2010: “Even now by ourselves”