Eritrea Festival 2010: “Even now by ourselves” 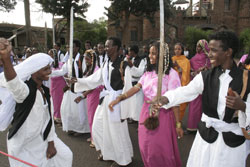 Eritreans, men or women, children or the elderly, are those who they are for a reason. They are precious and perfect creatures for their own country, Eritrea. They are special men or women to each other and their country. They, indeed, are the right chosen nationals for Eritrea. They are one other’s custom-designed in their minds, so that they bear their common seal; they were born to be what they really are, and so do are their children and their grandchildren will follow the line.

Their journey for independence was pretty traumatic—a traumatic period in the Eritrean history—that lasted with bitter and ferrous rule of the successive colonizers. And they deeply weep for it that it hurt them all. But they were not defeated, neither did they give up. Their determined fight to seas persecution enabled them to change the bitterness of colonialism into shaping their heart; and at last they grew into their likeness, united, common and loving people. Through this cooperative and united spirit drive for the common goal, full independence, they proved it to be that they are formed along the same rod. They didn’t allow their life to be driven by the pressures and bitterness of colonialism; they weren’t either guided by deadlines of haunting fear and disdain. Rather, they fought and sacrificed for their freedom and rights alone without the help of any external force.

Expatriate Eritrean nationals, during the time of struggle for independence, had undeniable contribution at strengthening and thrift national identity, and most importantly at consolidating the national struggle. They used to meet every year under the umbrella of ‘Eritrean Festival Bologna’ in which through this event they collect money and fund the national revolution. They get together from all corners of the world and discus and share information about their homeland and besides they pay their contribution on preserving Eritrea’s culture- norms, values and beliefs and other artistic works. During this occasion all of them wish to celebrate the festival in an independent country with the hospitable and innocent people of theirs.

Right after independence, just like what the expatriate Eritreans used to desire, Festival Bologna have started to held in the Expo ground here in the capital, Asmara. As such, participants of the festival come from all corners of the country with their own ways of dances and life styles, playing, in harmony with their traditional folk music; and different ways of dressing and costume. They share cultures and beliefs among each other.

The 19th Eritrea Festival of 2010, thus, opened last Saturday 31 of July 2010 and President Isaias Afwerki officially opened the festival; during which occasion ministers, senior Government and PFDJ officials, religious leaders and other distinguished guests were present. Participants, during that occasion witnessed that “our cultural heritage and national celebrations hold important national message” through the cultural shows they underway at the Expo ground; and that it would not only highlight the festival but also hold great national message.

Symbolizing the existing unity in diversity, all the cultural and artistic shows exhibit a platform in revealing mutual co-existence and harmony at national level with a common vision. Besides, the cultural performances staged in the event highlight the steadfastness and dedication of the Eritrean people in line with the friendly and hospitable culture. Also in this year’s festival, various educational activities, documentation, painting, photography, writing contest, traditional and modern song competitions, artistic and cultural shows, bazaar and the like are being featured in such more enhanced ways and with greater variety of participation.

All the regional villagers including the nine ethnic groups are the main ingredients of this delicious dish of ceremony. Besides the fact that the festival reveals the regionally organized cultural troupes testify through their shows that the Eritrean people’s social make up “is a complex inter-communal kinship ties that is a result of cross ethnic and religious combinations”, it also demonstrates the people’s  and Government’s continuous strives for full self reliance. All their efforts are tuner to practice the ideology of economic sustainability by saying, “Even now by ourselves”.

Everybody finds true that the Eritrean National Festival discusses the interconnection among social and political structures, and the contingent histories that constitute a sense of Eritrean national identity across local and regional affiliations. Because multitude of people, Eritreans form inside and outside as well as foreigners, stream into the festival site to

In the zonal exhibition halls all regions exhibited their respective heritages of both cultural and natural. Agricultural and other natural resource endowments of the country are also displayed in their exhibition. Strives for economic development that have been rendered and still active are being displayed there. Bigger agricultural inf

rastructures that are expected to have greater contribution for economic security and increase productivity are sampled through artistic but convincing ways.

Prosperous mining sites such as “Bisha Mining” are among those that grab the attention of the participants wowing them to express feeling that it will not be long to enjoy the benefits. Inventions and renovations pavilions demonstrate the creativity and hard work of the younger generations. Students are the main performers of this part. They actively participate in the ever growing technology of the present time.

Computer software and other machinery inventions of the students that are being displayed in the Expo exhibition halls rates the students’ educational performance is spear heading for ward. Generally speaking about this year’s festival it is time of national congregations and gatherings that truly reflect the unity of the Eritrean people. This gathering of Eritreans from within and abroad signifies the continuation of the love of our country and national unity that registered miracles in times upholding the nation’s sovereignty and nation building process coupled with economic security.
The main message communicated by the frequent Eritrean national congregation is therefore, it highlights the secrets behind our success and stands an assurance of its continuity and further expansion. And therefore time itself will repeat history again along our line for national development that the foundation of our praiseworthy history is our national unity.

An Effort that Needs Encouragement