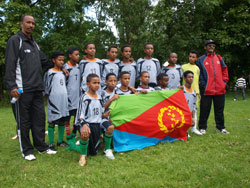 In the afternoon match, the Mekete team faced the Kenyan counterpart, and the two sides finished with 0 to 0 score during the regular and additional time. The Mekete team was subsequently out of the competition as a result of lot.

As for the Warsay team, it defeated the Norwegian counterpart with 3 to 0 score, thus advancing to the semi-final stage.