Eritrean Institute of Technology and College of Arts and Social Sciences graduate 1,785 students in degree and diploma 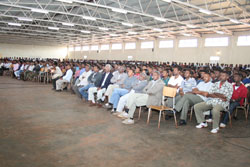 The Eritrea Institute of Technology and the College of Arts and Social Sciences graduated a total of 1,785 students in degree and diploma today.

Mai-Nefhi, 5 August 2010 – The Eritrea Institute of Technology and the College of Arts and Social Sciences graduated a total of 1,785 students in degree and diploma today.

Speaking at the graduation ceremony at Mai-Nefhi, the Deputy President of the National  Board of Higher  Educational Institutions, Dr. Gebreberhan Ogbazgi, pointed out that the Technology Institute is making vigorous efforts to nurture competent and productive citizens. He further noted that strenuous efforts are underway to reinforce the teaching-learning process, upgrading infrastructure facilities, construction of new laboratory and modern libraries as well as workshops.

Moreover, Dr. Gebreberhan indicated that some of the programs aimed at raising the number of teachers and upgrading their capacity includes masters program in four fields. He also called on the graduates to work diligently towards reinforcing the national development drive.

Also speaking on the occasion, Dr. Ogbagebriel Beraki, Dean of the College of Arts and Social Science, explained that the college t has managed to graduate 211 students in degree and diploma.

The Minister of Education, Mr. Semere Russom, handed awards to outstanding students, and said that the impressive progress made in education after independence is a source of satisfaction to the people and Government of Eritrea.

A representative of the graduating batch expressed readiness of the students to live up to the nation’s expectation.

The graduates out of which 1,574 from Institution of Technology Eritrea.