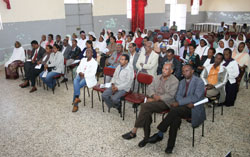 A number of foreign nationals from Europe, Asia, Africa, America and the Middle East are visiting Eritrea Festival 2010 at the national level being held at the Expo grounds, according to reports.

Asmara, 6 August 2010 – A number of foreign nationals from Europe, Asia, Africa, America and the Middle East are visiting Eritrea Festival 2010 at the national level being held at the Expo grounds, according to reports.

They stated that the festival created a favorable atmosphere to easily get acquainted with Eritrea and its people, besides getting familiarized with the country’s nation-building process. The foreigners further expressed deep impression with the prevailing cultural harmony, co-existence and mutual respect among the Eritrean society.

One of the visitors, Mr. Chen Shu from China, expressed admiration to the development registered in the domains of education, health, trade and industry. He went on to say that the products displayed at the festival attest to the fact that Eritrea would shortly become one of the developed countries in the African continent.

Mr. Edward Frank from Canada who visited the country for the second time said on his part that in his second trip, he came to learn that Eritrea has developed in many respects, and that the colorful multicultural shows at the festival enabled him to enrich his knowledge about Eritrea.

Still another foreign visitor, Mr. Christian Edwin from Germany, explained that he is lucky to visit the country at the time when the national festival is being held. He added that he previously observed Eritrea Festival in Europe and Asia which was quite unique and colorful. Mr. Christian said that he would visit Eritrea again with his family.

The foreign festival visitors highly appraised the prevailing peace and rich natural resources in Eritrea which encourages one to visit it again and again.