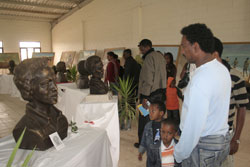 Not long after the closing of 4th Eri-youth Festival in Sawa, the eagerly awaited 19th Eritrea Festival 2010 at the national level opened last Saturday at the Expo grounds here in the capital that enable visitors to have a glimpse at the nation’s socio-cultural makeup.

In the very first day of the ceremony, a number of performers from the  nine Eritrean  ethnic groups wearing traditional ornaments and embellishments, and also beating drams, swinging swords and blowing horns, as well as dancing and  singing signaled  the  opening of a big festivity with an aura of great enthusiasm.
An internalized impulse of musical passion that is not dependent to beating time or counting steps, but rather a natural talent to dancing accorded with an impressive performance that keep  harmony with the ever changing rhythm indeed make it  a worth attending event.
The versatile colorful performances that marked the official opening of this year’s festival are undoubtedly on a par with one another. It is with this worth listening tunes and vocal accompaniments to the varied but unified beats that prompt instincts of every participant to take part in the varied performances in which President Isaias Afwerki opened it in the presence of high ranking government officials, ministers, dignitaries and a multitude of participants.
The President, accompanied by ministers and invited guests, made a tour of the pavilions of the six administrative regions where they observed various cultural handcrafts, samples of natural vegetation, marine resources, agricultural and industrial products. President Isaias subsequently visited the education village in which he observed the hard to imagine children’s creative ability that makes one wonder of the possibility of such accomplishments in their age and particularly their initiatives in identifying common deficits and partaking in invention and innovation to address them. The President also visited the rest of the pavilions in the festival.
Each pavilion of the six Eritrean regions has remained to be a center that is worth visiting. Each display provides one with magnificent but also very instructive contents that broaden one’s knowledge about societal makeup of each region. The exhibitions presented there in the pavilions are really picturesque in terms of cultural, historic, socio-economic contexts that give a visitor to have a glimpse of the overall activities of each respective region. It is in view of this fact that every summer Eritrean nationals inside  the country and abroad eagerly anticipate  the opening  of the festival with excitement so as to observe what the festival would showcase this time, and if any new thing would come each year. Needless to say, observing the traditional dances of the nine ethnic groups of the nation, all along at one platform, constitute a blessing that leaves lasting impression in the visitor’s mind.

Pavilion of the Central region has staged pictorial exhibition depicting the gradual urbanization of Asmara city and its architectural charm that have been effectively preserved to-date. The classic buildings constructed during the Italian colonial era were not merely built for aesthetic beauty but also bear significant messages of that period. What the displayed   photographs remind us is that to be always alert while making tours around the main streets of Asmara and experience the various Art deco building complexes with breathtaking decorative designs that are meant to portray the socio-cultural context of the period. Some of the buildings such as the ones around Enda Kanzen make an image of a train at a turning point, other represent gadgets of that respective era. Above all, most of the turns are not closed ends but rather form an arc-shape inviting one to have a good look over wide scenery so that he/she may not feel bored of to make tours time and again.

Falk dances of the nation’s ethnic groups and traditional sports activities have also been among the eye-grabbing programs that added color to the event. Besides, a number of cultural troupes have been staging shows on daily basis at the Expo grounds since the very opening of the festival.

Works of sculpture and painting prepared by the Ministry of Defense have also been a center of great attraction that won broad acclaim on the part of festival participants. The portrait size sculptures that exactly match the real photographs of veteran fighters have been a source of great admiration.
While touring to the pavilion of invention and innovation and other centers of varied shows, the visitor would find it hard to set off his/her eyes from the newly-made products that amply demonstrate the creative potentials of the youth. And that’s what makes visiting Eritrea Festival 2010 a really incredible and amazing experience for both nationals and expatriates. This being the case, it is becoming quite natural to see visiting tourists moving here

and there to capture the remarkable multicultural dances with their cameras.
Moreover, a competition among couples about relationship and marriage-related issues has been one among the favorite programs that gave life to the festival, while at the same time calling the attention of the audience and prompt them to think on how effectively and rationally the couples would answer to the questions put forth.
Ministries, corporations, institutions and business enterprises have also been showcasing their products. Eritrea Telecommunication Services Corporation, for instance, has displayed obsolete and up- to-date telephones that enable a visitor to have a vivid grasp of the gradual advancement of telecommunications services at the global level.
The details of the various programs being featured at the Expo grounds are wide-ranging that could not satisfy the thirsty of the visitors within the set time of the festival.  Seven days have already been elapsed since the festival has opened and it would remain open till 8th of August. Still,  the multitude of people and the eager pilgrims that flock  to the Expo grounds is keep on increasing with each passing day.