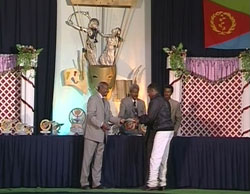 The Eritrea National Festival 2010 which has been underway in lively spirit since July 31 at the Expo grounds concluded today where winners in various activities staged during the event received prizes.

Asmara, 8 August 2010 – The Eritrea National Festival 2010 which has been underway in lively spirit since July 31 at the Expo grounds concluded today where winners in various activities staged during the event received prizes.

Speaking at the occasion, the Minister of Education and Chairman of the Holidays Coordinating Committee, Mr. Semere Russom said that the festival week has made it clear that the unity, values, sovereignty and patriotism of the Eritrean people continues to rise by the day. “Eritrea is a country that marches forward though culture, technology, information, justice, values, faith, love, history and the prospect of the future. Hence, all its adversaries should take note and realize that it is impossible to defeat a country like Eritrea,” he added.

The prize awarding ceremony began following the presentation of reports from committees of different competitions.  Accordingly, winners in innovation and creativity, information technology, traditional sports, couple’s competition, speech, artistic work, films and the like received their awards from the Minister of Defense, Gen. Sebhat Ephrem at individual and regional level.

Moreover, 14 best songs were awarded monetary prizes from the 186 songs produced during the year. As result ‘Hiji Hiray’ a song by Tesfai Mahri (Fihira), ‘Gu’e Leminey   by Yohannes Tikabo and ‘Eritria Simbeli’ by Mohammad Sha’ebi were awarded from first to third respectively.

In the course of the festival week, various entertainment programs such as regional pavilion, education activities, innovation, creativity and competitions in which regions, institutions, companies, ministries, members of defense force, national organizations took part were staged.

Over half a million nationals and foreigners have visited the 10 day national festival, reports disclosed.