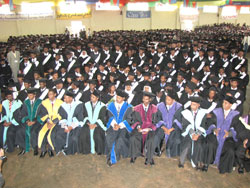 The Eritrean Institute of Technology that comprises of the colleges of Arts and Social Sciences, Education, Engineering and Technology, as well as College of Sciences held its third commencement last Thursday 5th of August 2010.With the exception of the college of Arts and Social Sciences, the other three colleges are permanent colleges of the EIT. Even though running an institution of higher learning and particularly like the institutions that give free educational access is undoubtedly very demanding, the College that started with limited facilities has been flourishing steadily.

The EIT is at present exerting concerted efforts in improving its qualification and is indeed on the right track of pursuing excellence. Laboratories for practical exercises have been put in place, educational material that meet the on going advancement have also been gradually fulfilled. The impact of these determinant factors can be seen in the academic excellence and performance of the students. The number of outstanding graduates has been increasing in each commencement which is an indication of the relentless efforts on the part of the students in one hand, and the viable learning atmosphere provided by the government on the other.

Despite the commendable achievements registered, development of the local faculty of the EIT has been one among the college’s challenges. Accordingly, speaking at the occasion Dr. Ghebrebrhan Ogubazghi, Vice President of the college said that EIT has made provisions to address the aforementioned shortcoming by initiating higher level studies for instructors and graduate assistants. Pointing out that EIT has already started masters’ program in ICT through on line learning, the vice president said that the college is about to start masters’ program in biology, mathematics, physics, and chemistry in the next academic year.

Qualification or excellence of any institution of higher learning is measured in terms of the achievement it registers in arming students with varied specializations and practical implementation of the knowledge and skill the students acquire when assigned in work places. In line with this, Dr. Ghebrebrahn said that the performance of students would help to put promote EIT’s image and called on the graduates to exert efforts in realizing and meeting the college’s cherished desire of excellence through giving efficient serving to the society.

Pointing out that the college has been committed to equip the students with appropriate knowledge; Dr. Ghebrebrhan also mentioned the preliminary achievement of EIT’s college of Education in graduating 411 students who have been pursuing their studies through Open Distance Learning (ODL) which in turn has up graded the trainees’ qualification as junior school teachers.

Ogbagebriel Beraki, Dean of college of Arts and Social Sciences on his part gave briefings on the situation of the college indicating that the college has so far graduated a total of 655 students in its three years of commencement and gave an overview of the newly established college at Adi Keih that would start to give services the coming September. Also present at the occasion, Mr. Semere Russom, the Minister of Education, on his part congratulated the graduating class and said that the event is a continuation of the commencements that have been held in different corners of the country and a festive moment that reflects the achievements registered in cultivating and equipping the youth with knowledge and skills.

Learning in the colleges has helped many students to learn more techniques of study and also to work together as a team. Eyob Kidane and Segen Dawit who graduated in computer science as outstanding students and also Meron Tekie a graduate with distinction in English said that studying in the college has provided   them ample opportunities to develop social skills and share experience with students from diffident corners of the country. With regards their study days at the EIT they said that though they experienced deficits in some educational facilities, the commitment on the part of the teachers and the ties established with international institutions of higher learning has helped them to solve the problems they experienced.

The above mentioned shortcomings would of course be solved gradually with the commencement of postgraduate studies and some of these graduates would gain the opportunity and partake in solving such problems. Mr. Semere’s address in the graduation event attests to this fact. He said: “Parallel with an increase in the number of students who join tertiary level education, the expansion of higher learning institutions in terms of quality and scope has been one of the major priorities to which the government has been making due effort in upgrading the competence of teachers through providing postgraduate courses.”

Another graduate, Ghidewon Goitom who joined tertiary education with a 4 grade average point in the matriculation exam has now completed his first degree in civil engineering with great distinction. He said that he had some know-how of the engineering works while working with his father in that field. But he aspires to pursue higher achievement in this field of engineering.
The EIT has in three years graduated a total of 4,272 students of which 3,150 completed studies in diploma while the rest are degree graduates. This number is an indication to the ever growing educational opportunities and also a predication of the better prospects in human resource development.

A Reflection of Eritrea’s Breakthrough in Sports