A Reflection of Eritrea’s Breakthrough in Sports 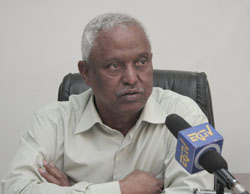 Eritrea will be hosting its first-ever continental cup of the CECAFA development and friendship cup. It is an experience first of its kind both in value and range. In this regard, we have conducted an extensive interview with the commissioner of the Eritrean Sports Commission, Maj General Romodan Awlyay concerning the general overview of sports in Eritrea and the CECAFA cup.  Excerpts follow:

Q: What qualifications did Eritrea meet to host the CECAFA cup?

A: We are members of CECAFA and we made the needed preparations as any other member of the league. Although we became a member in 1995, we have only been participants of the competition for various and explicit reasons, one of which is infrastructure. Infrastructure is a fundamental domain in this regard, and the football fields we had were not good enough to host tournaments as big as the CECAFA cup. But owing to the unremitting efforts we exerted over the years, we were able to standardize the stadiums we had, transforming us from participants to a host country. I can safely say that this is a great breakthrough in the sports sector of the country.

Q: What benefits can we expect by hosting this tournament?

Among the major goals and principles of sport are peace, friendship, equality and development. It is obvious that it will have a constructive impact in the sports of our country, our young players could be inspired and above all, we will be exposed to the rest of the world. It will be a great opportunity for Eritrea to promote its rich natural and cultural resources internationally. A lot more can be mentioned, but the most important of all is that Eritrea is a land of peace where the people enjoy a flawless harmony and development. On another aspect, all the national teams will bring their own culture and custom with them, which will lead to a great deal of cultural interaction among the participating nations. Generally speaking, the benefit of hosting such regional tournaments is huge and it is a great success for Eritrea to be the host country.

Q: What is the theme of this year’s CECAFA cup?

A: It is called the CECAFA Development and Friendship Cup and it carries a message that reflects our present stage. The CECAFA cup has been hosted under various themes, but ours is different in a way that we chose a theme that represents our development progress. We are engaged in an overall development drive to rebuild the infrastructure, which has been devastated.

A: Nurturing community based sports and providing equitable distribution and opportunities are the main pillars of developing sports. Our program is bringing sports at a parental level for it is obvious that an organization that doesn’t consider community organization could not be successful. There is an outstanding culture of sports in Eritrea. Almost every citizen from childhood is attached to sports, probably inspired by the customary sport activities in their respective areas and they tend to become engaged in any sport activity or at least become enthusiasts.

Plans are at hand and we have already embarked on enhancing teen sport activities among schools and His  Excellency, President Isaias Afwerki had made an appearance in such occasions. “The growth of sport cannot be ensured without the participation of the public” is the policy of the government.

Q: How do you see the organization of Eritrea’s sport?

A: We have a very smooth organization. The Eritrean Sports Commission leads from the top at a national level, and under its wings are the National Federation and the International Olympics Committee. There is also the Defense Ministry  Information  And Campaign department, representatives of the sports commission in all the regions and sends its regular report to the regional administration, which accordingly assists the representatives organize various tournaments in collaboration with villages, schools and colleges. In line with this, continuous training and  providing trained referees is a task that is undertaken by the collaboration of these bodies.

Q: What is our status when it comes to women and sports?

A: Policy wise, or even ideologically women possess equal opportunity with the men in sports. There are women representatives in all the federations and the committees formed nationwide. But the question is: “How is the practical performance and continuity of women in sports?” We conduct continuous assessments and meetings in connection with this matter. The information we have gathered so far is that the women tend to have a great inclination in sports at the elementary stage but somehow fade out gradually. It is basically attached with the fact that parents may not encourage them that much and other related institutions may not give them that much focus, but the issue of women and sports is something we are working hard to promote. “What should be done to enhance the participation of women in sports?”, and other related questions are raised constantly. As such, we have started consulting interested sponsors and it is showing gradual progress. I can even say that women in sports are growing dramatically.

Q: How inviting are the grounds to enhance participation of the youth in sports?

A: The grounds we provide rely on practical activities and perception. As has been mentioned earlier, sport needs to have a community base. Schools nationwide need to be sources of youngsters who possess the talent or the enthusiasm in various fields of sport. We are doing our level best to inspire the students on top of their academic performances, and the base starts right from there. Nurturing young talents and laying foundation begins from schools. The best place for growing talents to perform their skills is basically their school, which brings me to the unrelenting effort we are exerting in that section. There are representatives of the sports commission in schools to follow up the directives issued and implement them at their level.

Q: Is it safe to say the investment being made in sports is as needed?

A: Definitely; in various standards. The government allocates regular budget for the big and important events. Every federation receives its budget in accordance with the proposal they present and programs they outline. This is just the budget at hand, but if we try to look at the investments being made both as direct and indirect, there is even more. For instance, when the government builds a school in one village, it is built with the fundamental sports sections for the students and in line with the priority projects the government implements, we can say the investments being made in sports is inevitable. So far, the old Cicero stadium is undergoing intensive renovation and the big Asmara stadium has already been renovated, but the biggest investment is yet to come.

Q: How do you see our participation in international competitions?

A: competition is always the key for the growth of sports. Preparing domestic and international tournaments is very important to explore and evaluate the compatibility of teams. It is known that we have been taking part in a handful of international tournaments and many other countries have come over the years in the tournaments we host here. Hence, Eritrea has made many international appearances in various sports both big and small events. We have been participating in different football matches. Cycling race is also a popular sport though it can be quite an expensive sport. Plus, the infrastructure is very important for such kind of sport, you need to have good roads. Still, all things considered we can say that we have shown much progress in this area. We hosted an international Tour of Eritrea two times, and we also have cyclists who have acquired recognition for themselves in international races.
Although we entered into athletic competitions a little belatedly, we can say that our athletes have gained quite a reputation. We also occasionally participate in international competitions of hand ball, ground tennis, volley ball and others. We are trying our level best to gain international recognition for our teams and our country.

Q: What is being done to internationally standardize local games and competitions?

A: The first priority is always standard training. Our sportsmen need to be trained in the appropriate skills and also maintain the required sports ethics. And it is quite obvious that extensive investment and studies need to be made in order to achieve this. The investments can be both domestic and foreign investment. The Ministry of Education has started an investment in collaboration with Chinese trainers, this might be the first step foreword but there is also the need for recruiting capable mangers. The latter has been tried in the athletes and has had a good outcome and this is one of the new methods that need to be introduced in other fields of sport.

Q: How do you compare football in Eritrea in the 1990s with the present?

A: In general football in the country is in a better stage but to go into detail there might be some drawbacks. There may be a decline in the support and morale for the game, mainly due to the Ethiopian(TPLF) war of aggression. The TPLF invasion has obstructed many of the country’s plans and sport is one of them. In such situations we have to understand what comes as a first priority and the nation-building process is the priority of every citizen. At present, there is no interference to those who would like to be involved in sports. For example, students are obligated to do their national service but after they joined colleges, they have the opportunity to continue their sports activities. In general sport in the country is in a better stage but still there is the need for strong participation and efforts of the public.

Q: What preparations have been made in relation to Eritrea hosting the CECAFA Tournament?

A: The preparations are into two categories; as a host country and as participant, and in both terms all the necessary preparation have been concluded. The committee allocated for the CECAFA tournament has finished its preparation and as participants in the first tournament that we are hosting, our national team is engaged in rigorous training. In addition to the physical training, the team has a better improved quality of life particularly to the trainers and their coworkers.

The larger part of the preparation is regarding the logistics and management, which has already been completed. There is also the part in advertisement which we are working in cooperation with the Ministry of Information. There are also others like Civil Aviation, the Police Department and Ministry of Tourism who are working in collaboration with us to make this event successful. In addition to this, we are proud of this the culture of the people in warmly welcoming strangers and guests to the country as well as the peace and stability. We are hoping to acquire a good experience along with the successes we have in sports. Though the people do not need any advice but I would like to mention that they have participate in every aspect of the tournament to make this event  successful and we wish our national team all the best.